Rockport is a city in Aransas County, Texas, United States. The population was 8,766 at the 2010 census. It is the county seat.

Rockport is adjacent to the town of Fulton, and many refer to the combined communities as "Rockport-Fulton"; however, Rockport and Fulton are legally separate municipalities.

In 1870, Rockport was established as a cattle slaughtering, packing, and shipping port. The city is named for the rock ledge that runs along its shore.

The climate in this area is characterized by hot, humid summers and generally mild to cool winters. According to the Köppen Climate Classification system, Rockport has a humid subtropical climate, abbreviated "Cfa" on climate maps.

There were 3,157 households out of which 24.6% had children under the age of 18 living with them, 53.2% were married couples living together, 11.0% had a female householder with no husband present, and 32.6% were non-families. 28.7% of all households were made up of individuals and 14.5% had someone living alone who was 65 years of age or older. The average household size was 2.26 and the average family size was 2.74. 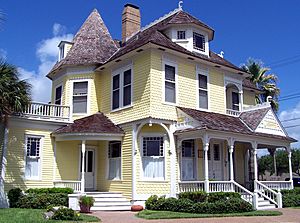 The Hoopes-Smith House in Rockport is listed on the National Register of Historic Places.

Rockport is a popular tourist destination for its access to various forms of marine recreation such as boating, fishing (bay, offshore, wade, beach, and pier), duck hunting, the ski basin, swimming, birdwatching, and seafood. The city's largest public beach, Rockport Beach Park, offers a wide variety of ways to have fun including a playground and two beach pavilions.

The city hosts several fairs and expositions each year including the Oyster Fest, Seafair, and a Wine Festival. There are also historic sites such as the Fulton Mansion, and a heritage district and aquarium in downtown Rockport that offers a friendly and fun shopping and restaurant environment next to Rockport Harbor.

The community has the Texas Maritime Museum, the Fulton Mansion State Historic Site, art galleries, restaurants, and shops. Area visitor accommodations are provided by a wide range of lodgings, from small bed and breakfasts to major hotels, and RV facilities.

Large windswept live oaks are a dominating feature of the area, and the state's oldest live oak, "Big Tree", resides on nearby Lamar Peninsula.

There are a number of marinas, boat launching ramps, marine service businesses, and ship chandlers in the area (catering to both recreational and commercial vessels, sail and power). Several marinas are operated by the Aransas County Navigation District, and there is also the Key Allegro Marina, a popular attraction, especially during The Rockport Offshore Challenge or The R.O.C.

Large Big Blue Crab, local park and attraction located on the banks of the Little Bay next to the Historic Sea View Motel.

The area around and in Rockport is noted as a prime birdwatching center, located on a major North American migratory bird route, the Central Flyway.

Whooping cranes winter in the large Aransas National Wildlife Refuge located nearby. Local organizations such as the Aransas Bird and Nature Club have helped preserve unique birdwatching reserves such as the Connie Hagar sanctuary and Aransas Woods that are easily accessible. Located along the migration route of several species of hummingbirds, the city hosts an annual "Hummer and Birding Expo" which includes tours of local residences where hundreds of ruby-throated hummingbirds can be viewed at feeders.

All content from Kiddle encyclopedia articles (including the article images and facts) can be freely used under Attribution-ShareAlike license, unless stated otherwise. Cite this article:
Rockport, Texas Facts for Kids. Kiddle Encyclopedia.