Fulton is a town in Aransas County, Texas, United States. As of the 2010 census, this South Texas coastal fishing community had a population of 1,358. The town is named for George Ware Fulton, a land developer in the area. 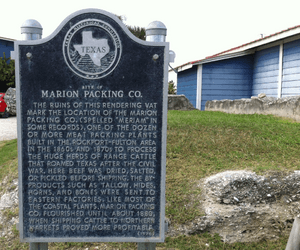 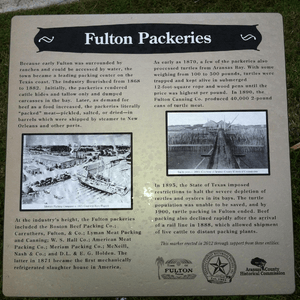 Fulton was founded in 1866, named for George Ware Fulton, Sr., a land developer in the area. Fulton had been a teacher in Indiana and decided to come to Texas by flatboat with 60 other men during the war for independence between Texas and Mexico. After the long trip to Texas, George Fulton found that the war was over but he joined the Army of the Republic of Texas for a few months.

Fulton built a large house, now known as the Fulton Mansion, in the area where Fulton stands. The town quickly became the site for many slaughterhouses as cattle from south Texas were driven to Fulton. The cattle slaughterhouses lasted until the 1880s, when railroads reached the area and provided ways to ship live cattle to population centers such as Chicago.

In 1930, some evidence of a prehistoric settlement was found in the Fulton area, possibly Karankawan.

There were 707 households, out of which 18.2% had children under the age of 18 living with them, 51.5% were married couples living together, 7.1% had a female householder with no husband present, and 37.8% were non-families. 32.1% of all households were made up of individuals, and 16.3% had someone living alone who was 65 years of age or older. The average household size was 2.20 and the average family size was 2.77.

The climate in this area is characterized by hot, humid summers and generally mild to cool winters. According to the Köppen Climate Classification system, Fulton has a humid subtropical climate, abbreviated "Cfa" on climate maps.

All of Fulton is served by the Aransas County Independent School District.

The town is also served by the Aransas County Public Library, located in Rockport.

All content from Kiddle encyclopedia articles (including the article images and facts) can be freely used under Attribution-ShareAlike license, unless stated otherwise. Cite this article:
Fulton, Texas Facts for Kids. Kiddle Encyclopedia.