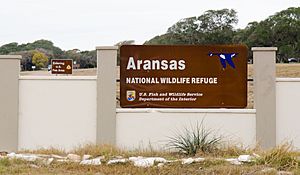 In October 1938, Civilian Conservation Corps Company 880 established camp south of Austwell, Texas. They built roads, ditches, firebreaks, and the residence facilities for the refuge. They constructed part of the spillway for Burgentine Lake, which serves as a major resting area for migratory waterfowl. They also graded the road to Austwell.

The Aransas National Wildlife Refuge is divided into five units, with two being contiguous and three being disconnected from the original Aransas unit. The Aransas Unit and Tatton Unit are located on the mainland, with the Aransas Unit being the original section of the refuge. The Aransas and Tatton Units are 47,261 acres and 7,568 acres, respectively. The Lamar and Myrtle Foester Whitmire Units are 979 acres and 3,440 acres, respectively. The largest unit is the Matagorda Island unit, with 56,683 acres. In its entirety, the refuge consists of 115,324 acres, and is the largest Fish and Wildlife Service protected area in the state of Texas.

All content from Kiddle encyclopedia articles (including the article images and facts) can be freely used under Attribution-ShareAlike license, unless stated otherwise. Cite this article:
Aransas National Wildlife Refuge Facts for Kids. Kiddle Encyclopedia.