Refugio County ( ri-FYOOR-ee-oh) is a county located in the U.S. state of Texas. As of the 2010 census, the population was 7,383. Its county seat is Refugio. The county originated as a municipality of Mexico in 1834 and was Classified as a county in 1837. 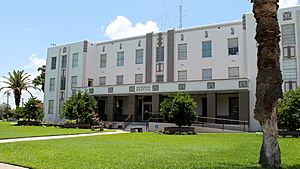 The Tom O'Connor field was discovered in 1934 with the Quintana No. 1-A well, the location of which was based on a gravity survey and a trend of other fields to the southwest and northeast between the Vicksburg Fault Zone and the Frio Fault Zone. The field is a structural trap formed by an anticline on the downthrown side of the Vicksburg Fault Zone. The faulting is due to "large-scale gravity slumping", and these types of faults are referred to as growth faults, which are normal faults that occur simultaneously with sedimentation. Most of the oil and half the gas is produced at depths between 4500–6000 feet, from 15 oil reservoirs and 4 gas reservoirs in the Oligocene Frio Formation sandstones deposited during Marine regression, notably the "5900 foot sand", the "5800 foot sand", the "5500 foot sand" and the "5200 foot sand". Gas with some oil is found above these sandstones in the Oligocene Anahuac Formation, deposited in a Marine transgression, notably the "4400 foot Greta sand". Dry gas is found in the Miocene-Pliocene Fleming sandstones deposited during marine regression, notably the "L-4 sand, which is overlain by 1400 feet of Pleistocene Lissie sandstones.

All content from Kiddle encyclopedia articles (including the article images and facts) can be freely used under Attribution-ShareAlike license, unless stated otherwise. Cite this article:
Refugio County, Texas Facts for Kids. Kiddle Encyclopedia.