Bee County is a county located in the U.S. state of Texas. As of the 2010 census, the population was 31,861. Its county seat is Beeville. The county was founded December 8, 1857 and organized the next year. It is named for Barnard E. Bee, Sr., a secretary of state of the Republic of Texas.

Bee County was officially formed on December 8, 1857 from sections of Refugio, Live Oak, San Patricio, Goliad, and Karnes counties. It was created and named in honor of Colonel Barnard Elliot Bee, a political leader who had served as Secretary of War under Sam Houston and later, as Secretary of State under Mirabeau B. Lamar during the governmental period of the Republic of Texas. The early European settlers of this area were mainly Irish immigrants, but towards the end of the 1840s and early 1850s, more settlers from the Southern states began to move in and build settlements. The migration patterns suggest that many of these southern settlers came from the North and South Carolina, Louisiana, and Mississippi.

The Roman Catholic faith was the state religion until the creation of the Republic of Texas in 1836. Other religions came to Bee County as settlers from the Southern states gained the population majority in the 1840s. Among the earliest Protestant religions to appear were the Methodists and the Baptists. These churches, particularly the Baptists, sent numerous missionaries to the area to help the small congregations survive. Many pastors traveled several miles each week to visit members of the various congregations throughout the county. By 1850 the Baptist and Methodists comprised 75 percent of all Texas congregations.

The Bee County Courthouse was designed by the architect William Charles Stephenson, originally from Buffalo, New York. The original courthouse, completed in 1912, cost $72,000. He also sculpted the "Justice Is Blind" monument (In his own words, an "Enlightened Justice") that tops the Courthouse; he intentionally chose the "non-blindfolded" concept. The structure uses the Chicago window style of a glass pane flanked by two narrow ones. It is classical with the grand portico having Corinthian columns at the entry.

Stephenson also designed the Rialto Theater in Beeville, now used for special occasion, not the running of films, which is located close to the Joe Barnhart Library. He helped construct the death mask of U.S. President William McKinley, who was assassinated in Buffalo in 1901. Stephenson also designed the courthouse in McMullen County, Texas and many other buildings, grand homes, schools, churches, and commercial buildings in and around Beeville. 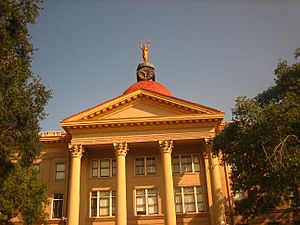 All content from Kiddle encyclopedia articles (including the article images and facts) can be freely used under Attribution-ShareAlike license, unless stated otherwise. Cite this article:
Bee County, Texas Facts for Kids. Kiddle Encyclopedia.