Kids Encyclopedia Facts
This page is about the city. For the strait, see Aransas Pass. 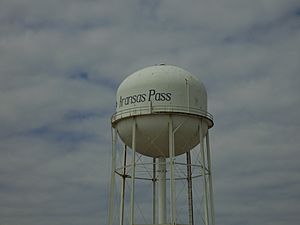 Aransas Pass ( ə-RAN-ziss) is a city in Aransas, Nueces, and San Patricio Counties in the U.S. state of Texas. The population was 9,005 at the 2016 Census Estimate.

Aransas Pass is located at 27°54′N 97°8′W﻿ / ﻿27.900°N 97.133°W﻿ / 27.900; -97.133 (27.9019, -97.1395),F on the shore of Redfish Bay, a tidal water body between Corpus Christi Bay to the south and Aransas Bay to the north. The city limits of Aransas Pass encompass most of Redfish Bay and its islands, most of which are in Nueces County, as well a portion of Aransas Bay in Aransas County. The land portion of the city is primarily in San Patricio County, extending north into Aransas County. The city is on the mainland of Texas and is connected to Mustang Island (which contains the city of Port Aransas) via a 6-mile (9.7 km)-long causeway, and a free ferry that carries vehicles to the island. By Texas State Highway 35 and U.S. Route 181, Aransas Pass is 20 mi (32 km) northeast of Corpus Christi.

The primary industries are shrimping and tourism, along with farming and oil and gas interests. The shrimp boat fleet sails from Conn Brown Harbor, a large, protected harbor chiefly dedicated to the shrimping industry. The area is popular for saltwater sports fishing and beach-going. 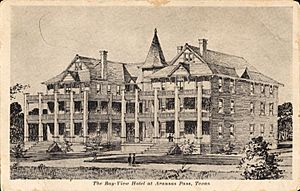 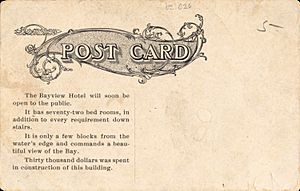 Aransas Pass is a destination for water sports, fishing, birding, kayaking, and hunting. The city is home to Conn Brown Harbor and the largest hummingbird garden in Texas. Events such as the Shrimporee, a three-day event, held in June, the Maybe Hot Maybe Not bike ride in November, and the Holiday Craft Show in December, as well as bay fishing on the Gulf Coast, keep visitors coming back to Aransas Pass.

Aquatic Park, a new addition to Community Park, features a competition-sized swimming pool with 1-m and a 3-m diving boards. The lap pool is heated, with a body slide attached to it. A kiddie pool, with depths from 1–3 ft, features a bucket drop and a cannon slide.

Community Park is located on Johnson Avenue at S. Arch Street. Included at the park are lighted baseball fields, with dugouts, bleachers, electronic score boards, a concession stand, and public rest rooms. In the picnic area, 10 handicapped-accessible covered picnic tables are available. Each table is equipped with a small grill. One larger covered area on a concrete foundation is available for big groups. The playground features a merry-go-round, monkey bars, slides, rocking riding toys, a two-story wooden play structure, and digging toys. It is also handicapped-accessible. A paved walkway extends from the baseball field to an elevated gazebo overlooking the wetlands of the Aransas Pass Nature Trail. From there, handicapped-accessible walkways extend in two directions, ending around areas for bird and wildlife watching.

San Patricio County Navigation District Marina, a 10-acre (4.0 ha) park, is located on Ransom Road. It is equipped with two double boat ramps and two covered boat shelters, an uncovered boat slip, and two boat trailer parking lots. This facility also has a recreational vehicle park with 36 spaces and hookups. It has two shelters with tables, running water, and lights. Wildlife viewing is available from three covered areas, with tables and barbecue grills, and a bait shop. Visitors can fish from a lighted fishing pier. The park has a separate children's playground with rock-riding toys and a jungle gym structure with a slide and climbing areas.

McCampbell Park, a city park, has a hard court surface with two basketball backboards and four picnic tables. No restroom facilities are available.

Newbury Park, at 1.2 acres (0.49 ha), is located on Harrison Boulevard at Lamont Street and Wheeler Avenue. A hummingbird landscape is there to attract hummingbirds.

The climate in this area is characterized by hot, humid summers and generally mild to cool winters. According to the Köppen climate classification system, Aransas Pass has a humid subtropical climate, Cfa on climate maps.

All content from Kiddle encyclopedia articles (including the article images and facts) can be freely used under Attribution-ShareAlike license, unless stated otherwise. Cite this article:
Aransas Pass, Texas Facts for Kids. Kiddle Encyclopedia.