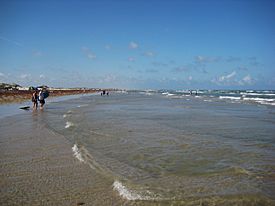 Mustang Island is a barrier island on the Gulf Coast of Texas in the United States. The island is 18 miles (29 km) long, stretching from Corpus Christi to Port Aransas. The island is oriented generally northeast–southwest, with the Gulf of Mexico on the east and south, and Corpus Christi Bay on the north and west. The island's southern end connects by roadway to Padre Island. At the northern end of the island is Port Aransas, beyond which is San José Island. The Aransas Channel, also known as the "Aransas Pass," which separates Mustang Island from San José Island, is protected by jetties extending into the Gulf from each island.

The island is a popular Spring Break destination for its beaches and is also popular with snowbirds Northerns and Canadians, who spend their winters in warm climates.

Mustang Island was first inhabited by Paleo-Indians. In 1519, when Spanish explorer Alonso Álvarez de Pineda sailed through the pass to what he later named Corpus Christi Bay, the island was inhabited by the Karankawa people. By the 18th century, as a result of grazing herds of horses introduced by Spanish settlers, the island was first called "Wild Horse", then "Mustang Island". Up to the 1840s, the island and pass (now the ship channel) were used by buccaneers, Mexican smugglers, merchants and immigrants seeking their fortune or someone else's fortune. The pirate Jean Lafitte purported frequented Mustang and neighboring islands during the 1820s.

During the Mexican–American War, a small fort was built on the island to defend the entrance to Aransas Bay.

Captain Robert Mercer was the first settler to set up residence on the island with his family. His wife is said to have been the first white woman in the area. He built a house there in 1853 and named it El Mar Rancho.

All content from Kiddle encyclopedia articles (including the article images and facts) can be freely used under Attribution-ShareAlike license, unless stated otherwise. Cite this article:
Mustang Island Facts for Kids. Kiddle Encyclopedia.