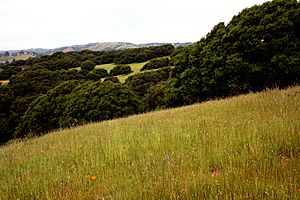 Joseph Knowland State Arboretum and Park is a park located in the Grass Valley neighborhood of Oakland, California. It was formerly a state park, and is now the property of the City of Oakland. The Oakland Zoo occupies the developed western lowlands of the park, just off I-580.

The park's namesake and principal founder was Joseph Knowland, who served on the California State Park Commission from 1934 to 1960 and was its chairman from 1938. Under his influence, the State of California purchased 453 acres (1.83 km2) for $660,000 on a matching grant basis. On April 30 1948, the property became a State Park. 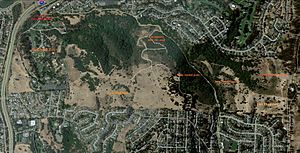 The largest and most pristine portion of the park is undeveloped, and yet is the most accessible to park users. The western highlands and northern slopes are currently a thriving hotspot for rare native plants and wildlife. Some of the natural highlights of the park include rare native plant communities, thriving but threatened wildlife, choice bird-watching locales, and a known-critical migratory corridor for mountain lions and bobcats. The park is traversed along its northern boundary by Arroyo Viejo which flows to Lion Creek and then San Leandro Bay.

In 2010, the East Bay Chapter of the California Native Plant Society (EBCNPS) included Knowland Park in its South Oakland Botanical Priority Protection Area due to its rich native plant resources that include rare natural communities of Valley Needlegrass Grassland and Maritime Chaparral.

All content from Kiddle encyclopedia articles (including the article images and facts) can be freely used under Attribution-ShareAlike license, unless stated otherwise. Cite this article:
Joseph Knowland State Arboretum and Park Facts for Kids. Kiddle Encyclopedia.