Government of California facts for kids

All offices are elected separately to concurrent four-year terms, and each officer may be elected to an office a maximum of two times. The Governor has the powers and responsibilities to: sign or veto laws passed by the Legislature, including a line item veto; appoint judges, subject to ratification by the electorate; propose a state budget; give the annual State of the State address; command the state militia; and grant pardons for any crime, except cases involving impeachment by the Legislature. The Lieutenant Governor is the President of the California Senate and acts as the governor when the Governor is unable to execute the office, including whenever the Governor leaves the state. The Governor and Lieutenant Governor also serve as ex officio members of the University of California Board of Regents and of the California State University Board of Trustees. Regulatory activity is published in the California Regulatory Notice Register and the general and permanent rules and regulations are codified in the California Code of Regulations.

State government is organized into many departments, of which most have been grouped together into several huge Cabinet-level agencies since the administration of Governor Pat Brown. These agencies are sometimes informally referred to as superagencies, especially by government officials, to distinguish them from the general usage of the term "government agency." When Brown took office, he was dismayed to discover that under California law, approximately 360 boards, commissions, and agencies all reported directly to the Governor, and proposed his "super-agency" plan (then spelled with a hyphen) in February 1961 to impose order on such chaos. Brown appointed the secretaries of the first four superagencies (of eight then planned) in September 1961. Today, the Cabinet-level agencies (superagencies) are the: 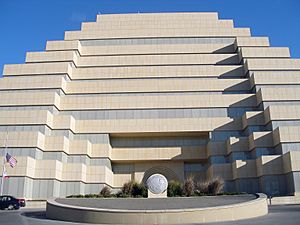 The Department of General Services headquarters in West Sacramento

The independently elected officers run separate departments not grouped within the superagencies, and there are other Cabinet-level departments:

There are several state government entities and offices that are supposed to be independent of direct control by the executive, legislative, and judicial branches of the state government, as well as any local government. Most (but not all) of the leaders of these entities are normally appointed by the Governor and confirmed by the state Senate. Despite their independence, the Governor can exert influence on them over time by waiting for incumbent leaders to reach the ends of their terms and appointing new ones who support the Governor's current agenda. 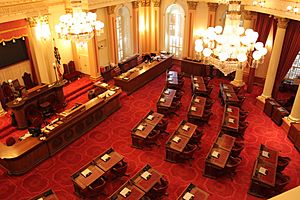 The state also allows direct participation of the electorate by initiative, referendum, and recall. 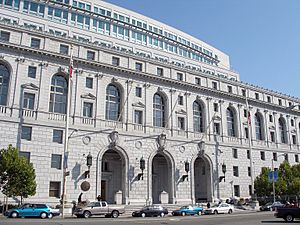 The Supreme Court of California headquarters in San Francisco

The Judiciary of California interprets and applies the law, and is defined under the Constitution, law, and regulations. The judiciary has a hierarchical structure with the Supreme Court at the apex. The Superior Courts are the primary trial courts, and the Courts of Appeal are the primary appellate courts. The Judicial Council is the rule-making arm of the judiciary.

The California Supreme Court consists of the Chief Justice of California and six Associate Justices. The Court has original jurisdiction in a variety of cases, including habeas corpus proceedings, and has discretionary authority to review all the decisions of the California Courts of Appeal, as well as mandatory review responsibility for cases where the death penalty has been imposed. The Courts of Appeal are the intermediate appellate courts. The state is geographically divided into six appellate districts. Notably, all published California appellate decisions are binding on all Superior Courts, regardless of appellate district.

The California superior courts are the courts of general jurisdiction that hear and decide any civil or criminal action which is not specially designated to be heard before some other court or governmental agency. As mandated by the Constitution, each of the 58 counties has a superior court. The superior courts also have appellate divisions (superior court judges sitting as appellate judges) which hear appeals from decisions of other superior court judges (or commissioners, or judges pro tem) in cases previously heard by inferior courts, such as infractions, misdemeanors, and "limited civil" actions (actions where the amount in controversy is below $25,000).

In a 2015 review by the nonprofit The Center for Public Integrity of how effectively states promote transparency and procedures to reduce corruption, California received a C-, the second-highest grade in the country. It ranked particularly low in public access to information and judicial transparency.

In 2005, Pew Research Center's Government Performance Project gave California a grade C-, tied for last with Alabama. By 2008, when the last report was issued, California had a C, which placed it near the bottom of the states. In discussing the results, the report noted that the personnel system is known to be dysfunctional, and that the Human Resources Modernization Project was underway to address the issue. 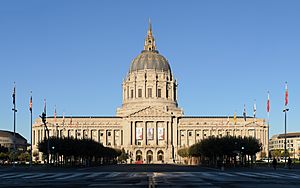 California is divided into counties which are legal subdivisions of the state. There are 58 counties, 482 California cities, about 1,102 school districts, and about 3,400 special districts. School districts, which are independent of cities and counties, handle public education. Special Districts deliver specific public programs and public facilities to constituents, and are defined as "any agency of the state for the local performance of governmental or proprietary functions within limited boundaries." Counties and incorporated cities may promulgate local ordinances, which are usually codified in county or city codes, respectively, and are misdemeanor crimes unless otherwise specified as infractions.

All content from Kiddle encyclopedia articles (including the article images and facts) can be freely used under Attribution-ShareAlike license, unless stated otherwise. Cite this article:
Government of California Facts for Kids. Kiddle Encyclopedia.