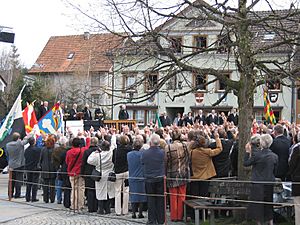 Landsgemeinde of the canton of Appenzell Innerrhoden, example for direct democracy in Switzerland

In a direct democracy, which is also called pure democracy the decisions are not taken by representatives. All decisions are voted on by the people. When a budget or law needs to be passed, then the idea goes to the people. Large governments rarely make decisions this way.

Costs and benefits of direct democracy

All content from Kiddle encyclopedia articles (including the article images and facts) can be freely used under Attribution-ShareAlike license, unless stated otherwise. Cite this article:
Direct democracy Facts for Kids. Kiddle Encyclopedia.