Pasadena City Hall, completed in 1927, serves as the central location for city government in the City of Pasadena, California and it is a significant architectural example of the City Beautiful movement of the 1920s.

In 1923, the people of Pasadena approved a bond measure issuing $3.5 million towards the development of a civic center. City Hall was to be the central element of this center. The San Francisco architecture firm of Bakewell and Brown designed City Hall, which has elements of both Mediterranean Revival Style and Spanish Colonial Revival Style architecture. It was completed on December 27, 1927 at a cost of $1.3 million. It measures 361 feet (110 m) by 242 feet (74 m), and rises 6 stories. There are over 235 rooms and passageways that cover over 170,000 square feet (16,000 m2). The defining dome, located above the west entrance, is 26 feet (7.9 m) tall and 54 feet (16 m) in diameter. On July 28, 1980 the Civic Center District, including Pasadena City Hall, was listed on the National Register of Historic Places as listing #80000813. 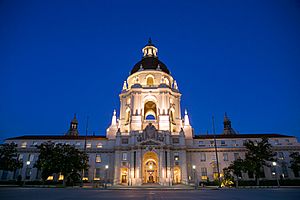 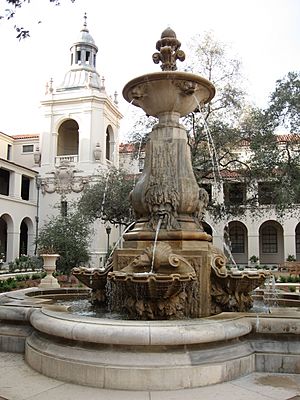 From a distance, Pasadena City Hall has always looked as though it has withstood the test of time. However, the building was showing signs of age by the late 20th century. The 1920s building did not meet modern building codes, and studies indicated that a major earthquake could destroy several parts of the building and likely result in a loss of life. The concrete walls had many deep cracks, and two of the stairway towers had considerable damage. There was also water damage from years of storms with little to no repair and maintenance. An effort to rehabilitate the aging building began in the late 1990s, led by Architectural Resources Group of San Francisco, California.

In July 2004, the building was vacated in order to allow for a complete overhaul of the structure. Over the course of three years, all offices and council chambers were renovated, the facade was restored, the building was adapted to meet ADA standards, HVAC systems were replaced and modernized, and new landscaping and architectural lighting was installed. To help ensure it would withstand future earthquake activity, the building was lifted off its foundation, equipped with structural base isolators and given a new foundation. The renovation of Pasadena City Hall earned a LEED Gold certification.

Following construction, staff moved back starting in April 2007 and City Hall was fully operational again by July. At the time, the Los Angeles Times noted: "In a city where historic preservation is much like a civic obsession, City Hall has long been among the crown jewels of Pasadena, along with the Colorado Street Bridge, the Rose Bowl and the Gamble House. Although the renovation has been among the costliest public works projects in Pasadena, totaling $117 million, city officials decided that they couldn't risk losing the landmark in another quake."

All content from Kiddle encyclopedia articles (including the article images and facts) can be freely used under Attribution-ShareAlike license, unless stated otherwise. Cite this article:
Pasadena City Hall Facts for Kids. Kiddle Encyclopedia.