Piedmont is a small city located in Alameda County, California, United States, completely surrounded by the city of Oakland. Its residential population was 11,270 at the 2020 census. The name comes from the region of Piedmont in Italy, and it means 'foothill.' Piedmont was incorporated in 1907, and was developed significantly in the 1920s and 1930s.

The original neighborhood of Piedmont was larger than the current municipality of Piedmont, with the Mountain View Cemetery considered full part of the Piedmont neighborhood.

Residents originally sought incorporation in 1907. Two elections were held among the citizens of Piedmont in 1907, both of which narrowly upheld the decision for Piedmont to become a separate city, rather than become a neighborhood within the city of Oakland.

According to the city's web page, "In the Roaring Twenties Piedmont was known as the “City of Millionaires” because there were more millionaires per square mile than in any city in the United States." Many of these millionaires built mansions that still stand, notably on Sea View Avenue and Sotelo Avenue/Glen Alpine Road in 'Alta' Piedmont. Piedmont became a charter city under the laws of the state of California on December 18, 1922. On February 27, 1923, voters adopted the charter, which can only be changed by another vote of the people.

Piedmont celebrated the year 2007 as its Centennial Anniversary since incorporation. The Centennial Committee hosted celebratory events along a trail that runs through downtown Piedmont and denoted historical landmarks in the city. The Committee also created a float for the city's Fourth of July parade.

The historical exhibit "A Deluxe Autonomy: Piedmont’s First 100 Years" was on display in the Oakland Public Library from January 5 to March 31, 2007. 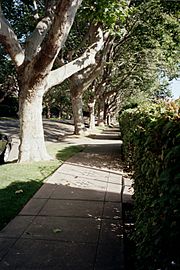 It is located near the Hayward Fault, a geological fault line that runs through the East Bay region.

Piedmont is a small, residential community located in the East Bay hills. Piedmont is surrounded on all sides by the city of Oakland's more historic residential districts. Specifically, Piedmont's northwestern border is adjacent to Oakland's Piedmont Ave commercial district. Piedmont borders Oakland's historic Grand Lake District (Lakeshore and Grand Ave commercial districts) to the west, Oakland's Rockridge District to the northeast, the quaint and more rustic Montclair District on its eastern border and the Crocker Highlands and Glenview Districts to the southwest.

Piedmont's major streets include Oakland Avenue, which runs east–west through Piedmont's small city center; Highland Avenue, which divides Piedmont into upper and lower sections; Moraga Avenue, which runs along the city's northern border; and Grand Avenue, which runs near Piedmont's western border and further distinguishes 'Lower' Piedmont (west of Highland Ave) from 'Baja' Piedmont (west of Grand Ave). Lots in upper Piedmont are, on average, larger than lots in lower Piedmont. A nearby shopping district on Piedmont Avenue is located in Oakland, not Piedmont. A small shopping hamlet had been located on Highland Avenue near the Excedra at Piedmont Park for many years, but in the last few decades has dwindled in number to a small, local grocer-deli (Mulberry's Market), a service station and three banks. No major highways run within Piedmont's borders but entrances to scenic* CA Highway 13 and CA I-580 are quite near. *A 'scenic' designation means no billboards or advertisements are permitted.

Piedmont is almost entirely zoned for single-family dwelling residential use. Piedmont has minimal commerce compared with statistically similar cities, and relies primarily on property taxes and fees for public revenues to support public services. The city also has relatively few multi-family or second (in-law) units. The city has a very small number of businesses in its commercial district on Highland Avenue and a very small number of businesses on Grand Avenue near Piedmont's western border with Oakland.

The city is served by two local weekly newspapers: the Piedmont Post and the Piedmonter, a neighborhood newspaper organized under the Contra Costa Times news organization.

There were 3,804 households, 47.3% containing children under the age of 18, 70.9% were married couples living together, 8.5% had a female householder with no spouse present, and 18.4% were other family configurations. 14.5% of all households consisted of individuals, and 7.8% were households consisting of senior (age 65+ years) individuals. The average household size was 2.88, and the average family size was 3.18. 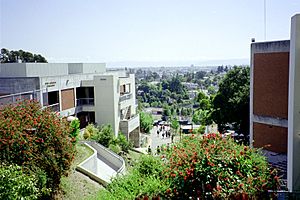 The Piedmont Unified School District currently ranks #68 of 756 districts in the state of California according to one statistical analysis of California public education.

Most recently, with the passage of Measure E in 2006, voters authorized the Piedmont Unified School District to issue up to $56 million in bonds to improve Piedmont public school buildings to reduce dangers from earthquakes, eliminate major collapse risks, and to meet or exceed all current state and federal seismic safety standards.

In addition to the public bond measures approved for PUSD facility upgrades and modernization, Piedmont voters have quadrennially approved, since 1980, a supplemental parcel tax (collected annually) which accounts for a very significant portion of PUSD's basic operational budget. In 2005, two measures were approved by voters, one of which renewed the basic school district parcel tax, paying for 21% of the district's budget, and another which added an incremental amount, short-term, to compensate for reduced funding from mainly state, and some federal, sources. Piedmont's most recent school support tax, Measure A, was again approved by 88% of Piedmont voters in 2012. Due to further reductions in state education budgets during the Great Recession (2008-2011), state diversions from local school property tax allocations since 2004, and shifting of state financial responsibilities onto local school districts, Piedmont's local school parcel tax now represents 30% of PUSD's annual operating budget.

The Piedmont Educational Foundation awards a number of grants for academic innovation in Piedmont schools each year, and provides a source of operational funding for the PUSD through its Endowment Fund which reached $6 million in 2015.

Other residents have included: F. Wayne Valley, philanthropist, construction magnate, owner of the Oakland Raiders and founding member of the AFL; Frank C. Havens, for whom Havens Elementary School is named; and James Gamble, president of the Western Union Telegraph Company, who, in 1877, founded the Piedmont Land Company, introducing the name adopted by the city upon incorporation.

All content from Kiddle encyclopedia articles (including the article images and facts) can be freely used under Attribution-ShareAlike license, unless stated otherwise. Cite this article:
Piedmont, California Facts for Kids. Kiddle Encyclopedia.