Rockridge is a residential neighborhood and commercial district in Oakland, California. Rockridge is generally defined as the area east of Telegraph Avenue, south of the Berkeley city limits, west of the Oakland hills and north of the intersection of Pleasant Valley Avenue/51st Street and Broadway. Rockridge was listed by Money Magazine in 2002 as one of the "best places to live".

It lies at an elevation of 187 feet (57 m). Some residential portions of the neighborhood consist mainly of relatively large homes built between the 1920s and the 1950s, although some homes date even earlier to 1909–1912. Other portions of the neighborhood consist of small bungalows and cottages. In other sections, multi-family apartment buildings add density which supports nearby transit and retail. It is also home to Claremont Country Club.

Rockridge is named for the outcroppings of rock at the northern end of the long shutter ridge formed by the Hayward Fault which encloses the linear valley in which the Montclair district of Oakland is situated. An example of this rock can be seen at an abandoned quarry adjacent to the Rockridge Shopping Center on Pleasant Valley Road. This quarry was operated well into the 1950s and is now used as a reservoir for the Claremont Country Club. Prior to the construction of the shopping center in the late 1960s, the Broadway side of the shopping center had a used car lot.

Much of the buildout of Rockridge in the 1920s was powered by the desire of middle-class white protestants to avoid 'undesirable' racial groups, powered by racial covenants that prohibited ownership of property by certain ethnic groups. This is reflected in the current racial makeup of the area—it, unlike most of Oakland, is mostly white.

Like many neighborhoods, Rockridge has had its ups and downs. Prior to the completion of Highway 24 in 1964, Miles Avenue and several other streets were laid out differently. Residents living in the area at the time, once known as "Little Italy" because of a large number of Italian immigrants, saw the decline of the neighborhood's human scale into the 1970s due to the separation of the neighborhood caused by the SR-24 freeway. In the mid to late 1970s, some storefronts on College Avenue were boarded up. However, due to the success of a number of new businesses, who together formed a "critical mass" of commercial attraction, the Rockridge commercial district began to thrive again.

Until the 1950s, electric trolley trains ran along College Avenue on what is now AC Transit bus routes 51A and 51B. Additionally, as late as 1959, the railroad tracks of the Sacramento Northern Railway ran along Shafter Avenue, crossed College Ave. near where the Rockridge BART station is now and ran along the corridor of what is now state Highway 13 (the portion after Ashby Ave.), through Montclair Village and over into Contra Costa County. Film footage of this route has been broadcast over local PBS TV station KQED in a 1990s documentary on the development of the East Bay.

The Oakland Firestorm of 1991 came within 1/2 mile of College Avenue, destroying a large part of the Upper Rockridge area east of Broadway. A memorial wall was created under the Rockridge BART station, located on College Avenue, following the fire. 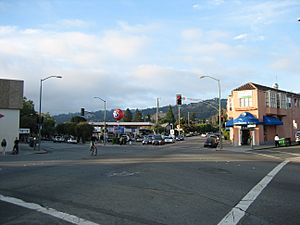 The intersection of College Avenue and Claremont near the northern end of Rockridge.

BART serves the neighborhood with the Rockridge Station. The area around the station provides transportation by train, bus, and casual carpool to all Bay Area airports, downtowns, and entertainment districts, while surrounded by open air markets, cafes, bars, shopping, and homes. The Rockridge BART station is located in the center of Rockridge, where College Avenue passes under the Grove Shafter Freeway (Highway 24). AC Transit bus lines 49, 51A, and 51B serve the center of the neighborhood, while line E runs along Claremont Avenue and lines 6, 12, CB, and V run along its edges.

Many Rockridge residents are involved in their neighborhood's political, educational and cultural life. Rockridge has several community organizations including the Rockridge District Association and the Rockridge Community Planning Council. The Rockridge News is published monthly and hand delivered to every resident's home.

Rockridge is home to the community-built Rockridge-Temescal Greenbelt Park, a linear park anchored at each end by two unique community-built play structures. It is commonly known as Frog Park, for the acronym of the organization which helped build the park, called FROG, the Friends of the Rockridge Temescal Greenbelt. FROG was organized in 2001 and raised more than $100,000 from the community to create the greenbelt park. It includes two play structures built entirely by volunteers, linked by a landscaped path which follows Temescal Creek, winding from Hudson Street to Redondo and Clarke. There are also basketball courts, a dog park, butterfly garden, public art by Mark Brest van Kempen, a Lily Pad Plaza, and a series of picnic tables and benches. The community group FROG is a project of the Rockridge Community Planning Council; a FROG steering committee organizes maintenance and community clean-up activities.

The Rockridge neighborhood is served by the Oakland Unified School District.

Claremont Middle School (formerly Claremont Junior High School) has occupied its campus on College Avenue in the heart of Rockridge since 1913. The original building was demolished and rebuilt during the 1970s as part of a statewide program of retrofitting schools for earthquake safety. Claremont now serves more than 400 students in grades 6–8.

An “alternative” public school, Far West High School, is a visual arts-focused campus for grades 7–12. It occupied the site of the former Rockridge Elementary School on Broadway Terrace, across the street from the California College of the Arts. The Oakland School Board made the decision in 1979 to close and demolish Rockridge Elementary School because of declining enrollment (less than 150 students) and fears for the earthquake safety of the original school building, a two-story structure built in 1923. The original auditorium was torn down in the 1950s, and the current one (still in use and doubling as the cafeteria) was constructed in 1959. It is now the upper campus to Oakland Technical High School.

All content from Kiddle encyclopedia articles (including the article images and facts) can be freely used under Attribution-ShareAlike license, unless stated otherwise. Cite this article:
Rockridge, Oakland, California Facts for Kids. Kiddle Encyclopedia.