Oakland firestorm of 1991 facts for kids 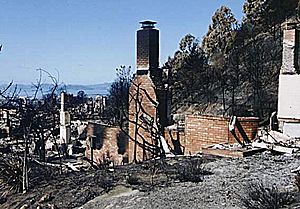 Houses burnt from the fire

The Oakland firestorm of 1991 was a major fire in October 1991 in west-central California. The fire began on Saturday, October 19, 1991 on the hillsides of northern Oakland and southern Berkeley.

The official name of this wildfire was "Tunnel fire".

Twenty-five people died in this wildfire. Another 150 were injured.

The fire caused $1.5 billion in damage.

More than 2,800 houses and 437 apartments and condominiums were severely damaged or destroyed by the fire.

All content from Kiddle encyclopedia articles (including the article images and facts) can be freely used under Attribution-ShareAlike license, unless stated otherwise. Cite this article:
Oakland firestorm of 1991 Facts for Kids. Kiddle Encyclopedia.