The Bushrod neighborhood in North Oakland, Oakland, California is an area surrounding its namesake park, and bounded by Martin Luther King, Jr. Way to the west, Claremont Avenue to the east, Highway 24 to the south, and the Berkeley border to the north. It borders the neighborhoods of Sante Fe to the west, Fairview Park to the east, and Temescal and Shafter to the south and southeast, respectively. Notable landmarks include the Bushrod Park ballfields and the former Bushrod Washington Elementary School, which share adjoining land on a large greenbelt and open space in the heart of the neighborhood.

In 2017, the real estate firm Redfin name Bushrod the hottest neighborhood market in the United States based on traffic to its website by potential home buyers. 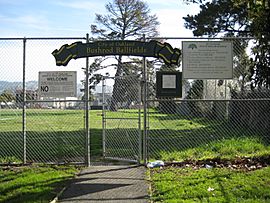 At 10.12 acres (41,000 m2), Bushrod is one of the largest parks in the North Oakland section of Oakland, California. It is located between Shattuck Avenue and Racine Street to the east and west, and between 61st Street and 59th Street to the north and south.

The park was established in 1903 through the donation of seven and a half acres of land by Dr. Bushrod Washington James, a resident of Philadelphia, Pennsylvania. In the 1910s it was used as a school playground. It has had a long association with local baseball; baseball players Rickey Henderson, Frank Robinson, Billy Martin, and Vada Pinson played at Bushrod in their youth. In the 1960s, the park was used as a practice field by the Oakland Raiders. The tennis courts are named for Don Budge who played here as a youth.

On April 8, 2006, a block of ice fell from the sky and landed in the park, leaving a crater that was several feet wide.

Dover St Park is located at 5707 Dover St between 57th and 58th St. This park is home to a community garden that produces fruits, vegetables, flowers, and herbs. It includes a greenhouse, pollinator garden and over 100 fruit trees. 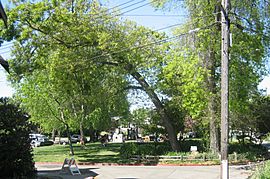 At only 0.35 acres (1,400 m2), Colby Park is one of the smallest parks in North Oakland. It is situated at 61st & Colby Street, and features a sand pit and playground equipment.

The Sankofa Academy is a public school that occupies the building previously used by the Bushrod Washington Elementary School, adjacent to Bushrod Park at 61st Street and Shattuck Avenue. The school was founded in 2005 and is a member of the Oakland Small Schools Foundation. 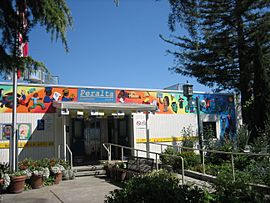 Peralta Elementary School is a designated arts anchor school in the Oakland Unified School District. It was established in 1880 as a one-room schoolhouse, and today has over 250 students. It is also one of the top ranked Elementary schools in the Oakland and Berkeley neighborhoods.

All content from Kiddle encyclopedia articles (including the article images and facts) can be freely used under Attribution-ShareAlike license, unless stated otherwise. Cite this article:
Bushrod, Oakland, California Facts for Kids. Kiddle Encyclopedia.