Castro Valley is named after Don Guillermo Castro, who was a soldier in the Mexican army and a rancher.

Before the arrival of European settlers the area was settled by the Chocheño (also spelled Chochenyo or Chocenyo) subdivision of the Ohlone Native Americans.

Castro Valley was part of the original 28,000 acre (110 km²) land grant given to Castro, called Rancho San Lorenzo. This land grant included Hayward, San Lorenzo, and Castro Valley, including Crow Canyon, Cull Canyon, and Palomares Canyons. Castro had a gambling habit and had to sell off portions of his land to pay gambling debts. The last of his holding was sold in a sheriff's sale in 1864 to Faxon Atherton for $400,000.

Atherton (after whom the city of Atherton is named) in turn began selling off his portion in smaller parcels. Two gentlemen named Cull (the namesake of Cull Canyon) and Luce bought some 2,400 acres (10 km²) and began running a steam-operated saw mill in Redwood Canyon. The Jensen brothers also bought land from Atherton in 1867.

During the 1940s and 1950s, Castro Valley was known for its chicken ranches. Later it developed into a bedroom community, where workers live and commute to their jobs in the surrounding communities.

Lake Chabot lies at the north of Castro Valley. Directly to the west is San Leandro. Hayward is to the south. To the east, the closest cities are San Ramon, Dublin, and Pleasanton. The San Leandro Hills extend along the northeastern edge of the community. 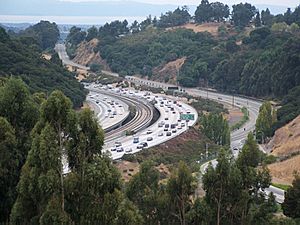 Interstate 580, with BART tracks in the center, near Castro Valley.

There were 22,348 households out of which 36.1% had children under the age of 18 living in them, 54.3% were opposite-sex married couples living together, 12.6% had a female householder with no husband present, and 5.2% had a male householder with no wife present. 5.0% of households were unmarried opposite-sex partnerships and 1.0% were same-sex married couples or partnerships. 21.7% of households were made up of individuals and 8.9% had someone living alone who was 65 years of age or older. The average household size was 2.69 and the average family size was 3.15.

There were 21,606 households out of which 32.3% had children under the age of 18 living with them, 54.0% were married couples living together, 11.0% had a female householder with no husband present, and 30.5% were non-families. 23.2% of all households were made up of individuals and 9.3% had someone living alone who was 65 years of age or older. The average household size was 2.58 and the average family size was 3.05. 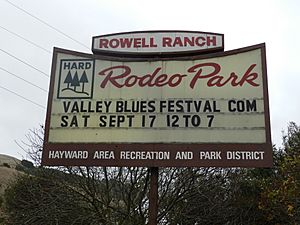 Castro Valley is one of the sites where Joseph Eichler built some of the 10,000 or so homes he built in the Bay Area. Castro Valley has a one-screen movie theater, the Chabot Cinema. The Castro Village complex on Castro Valley Boulevard is widely considered the commercial center of town. The Harry Rowell Rodeo Ranch is located in Castro Valley and is managed by the Hayward Area Recreation and Park District. Rodeos are held there regularly.

The first public school in Castro Valley is a designated California Historical Landmark. A plaque is placed at the original site. The one-room schoolhouse was donated for "educational purposes only," by Josiah Grover Brickell in 1866. Brickell provided the salary for the first teacher. During the day the teacher taught children and in the evening they taught farmhands. The school burnt down in 1901. It was rebuilt and burned down again in 1920. A new school was built on another property.

The Adobe Art Gallery is a program operated by the Hayward Area Recreation and Park District promoting the visual arts and uses the Adobe building, built as a Works Progress Administration project in 1936.

Interstate 580, which approaches from the east, makes a turn northward at Castro Valley. Interstate 238, which originates in Castro Valley, connects I-580 to Interstate 880. In addition to being served by those two freeways, Castro Valley is served with public transportation by bus system AC Transit, and rapid transit system BART with a station. 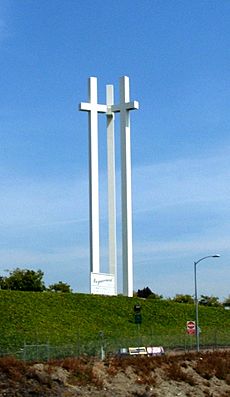 The three crosses of the Neighborhood Church form a prominent local landmark. 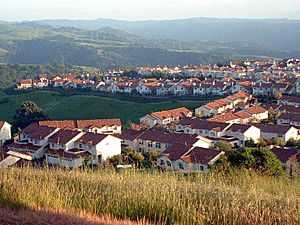 Palomares Hills (on the east side of Castro Valley) looking south toward Palomares Canyon. 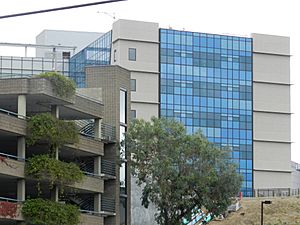 Eden Medical Center operates in Castro Valley. It is a Sutter Health facility, and provides basic emergency medical services for the area.

All content from Kiddle encyclopedia articles (including the article images and facts) can be freely used under Attribution-ShareAlike license, unless stated otherwise. Cite this article:
Castro Valley, California Facts for Kids. Kiddle Encyclopedia.