Clifford Lee "Cliff" Burton (February 10, 1962 – September 27, 1986) was an American musician and songwriter, best known as the second bass guitarist for the American band Metallica from December 1982 until his death in September 1986.

Burton joined Metallica in 1982 and performed on the band's first three studio albums: Kill 'Em All, Ride the Lightning and Master of Puppets. He also received a posthumous writing credit for the song "To Live Is to Die" from the band's fourth studio album, ...And Justice for All.

On September 27, 1986, Burton died in a bus accident in Kronoberg County, a rural area of southern Sweden, as the band was touring in support of the Master of Puppets album. Burton was replaced by bassist Jason Newsted the following month. He was also posthumously inducted into the Rock and Roll Hall of Fame with Metallica on April 4, 2009. He was selected as the ninth greatest bassist of all time in an online reader poll organized by Rolling Stone magazine in 2011.

Clifford Lee Burton was born in Castro Valley, California, to Ray and Jan Burton. He had two elder siblings, Scott and Connie. Burton's interest in music began when his father introduced him to classical music and he began taking piano lessons.

In his teenage years, Burton had an interest in rock, classical, and eventually heavy metal. He began playing the bass at age 13, after the death of his brother. His parents quoted him as saying, "I'm going to be the best bassist for my brother." He practiced up to six hours per day (even after he joined Metallica). Along with classical and jazz, Burton's other early influences varied from southern rock and country to the blues. 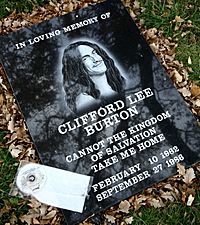 During the European leg of the Damage Inc. tour in support of Master of Puppets, the band complained that the sleeping cubicles on their tour bus were unsatisfactory and uncomfortable. To decide who received pick of the bunks, Kirk Hammett and Burton drew cards. On the evening of September 26, 1986, Burton won the game with an ace of spades, thereby getting the first choice of bunk and pointed at Hammett and exclaimed, "I want your bunk!" Hammett replied, "Fine, take my bunk, I'll sleep up front, it's probably better up there anyway." Burton was sleeping shortly before 7 am on September 27 when, according to the driver, the bus skidded off the road (the E4, 12 miles (19 km) north of Ljungby), and flipped onto the grass in Kronoberg County. Burton was thrown through the window of the bus, which fell on top of him, resulting in his death. 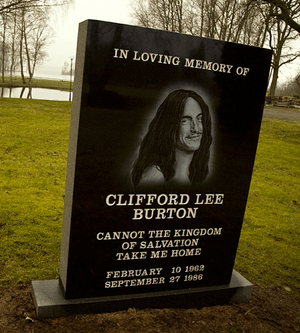 A memorial for Burton near the crash site

Burton's body was cremated and the ashes scattered at the Maxwell Ranch. At the ceremony, the song "Orion" was played. The lyrics "...cannot the Kingdom of Salvation take me home" from "To Live Is to Die" are written on Burton's memorial stone. Shortly after Burton's death, Jason Newsted from Flotsam and Jetsam became Metallica's new bassist, a position he held until his resignation in 2001. The role has since been filled by producer and studio musician Bob Rock and by the former bassist of Suicidal Tendencies and Ozzy Osbourne, Robert Trujillo.

Metallica wrote a tribute to Burton titled "To Live Is to Die" for ...And Justice for All. Burton also received a writing credit for the lyrics and bass parts that were taken from unused bass recordings done by Burton which were re-recorded by Jason Newsted.

On October 3, 2006, a memorial stone was unveiled in Sweden near the scene of the fatal crash. It is located by the parking lot to Gyllene Rasten.

Thrash metal band Anthrax dedicated its album Among the Living to him, as did Metal Church with The Dark.

On April 4, 2009, Burton was posthumously inducted into the Rock and Roll Hall of Fame, with fellow Metallica bandmates James Hetfield, Lars Ulrich and Kirk Hammett. Future bassists Jason Newsted and Robert Trujillo were inducted as well. During the ceremony, the induction was accepted by his father Ray Burton, who shared the stage with the band and mentioned that Cliff's mother was actually Metallica's biggest fan.

A biography, To Live Is to Die: The Life and Death of Metallica's Cliff Burton, written by Joel McIver, was published by Jawbone Press in June 2009. Hammett provided the book's foreword.

In 2017 it was revealed that Burton's parents had been "quietly" donating his posthumous royalty payments to a scholarship fund for music students at his Alma mater Castro Valley High School.

All content from Kiddle encyclopedia articles (including the article images and facts) can be freely used under Attribution-ShareAlike license, unless stated otherwise. Cite this article:
Cliff Burton Facts for Kids. Kiddle Encyclopedia.