Kirk Lee Hammett (born November 18, 1962) is an American musician who has been lead guitarist and a contributing songwriter for the heavy metal band Metallica since 1983. Before joining Metallica he formed and named the band Exodus. In 2003, Hammett was ranked 11th on Rolling Stone's list of The 100 Greatest Guitarists of All Time. In 2009, Hammett was ranked number 15 in Joel McIver's book The 100 Greatest Metal Guitarists. 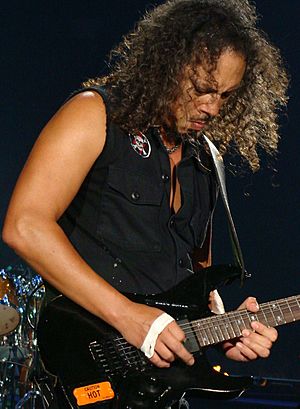 Hammett has a well-known passion for horror movies; that stretches back to the late Sixties. After spraining his arm in a fight with his sister at the age of five, Hammett's parents placed him in front of the television. It was during this time that he first watched The Day of the Triffids. After that, Hammett found himself drawn to his brother's Frankenstein figures, and it wasn't long before he was spending his milk money on horror magazines. 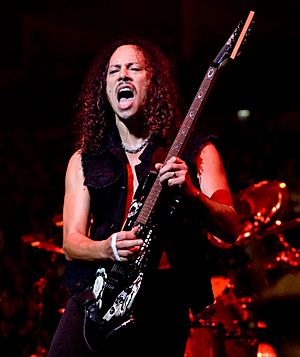 Hammett began showing an interest in music after listening to his brother Rick's extensive record collection (which included Jimi Hendrix, Led Zeppelin and UFO). It was then that Hammett's whole life shifted and he stopped collecting horror magazines, and began selling his magazines to buy music records. This all led him to properly picking up the guitar at the age of fifteen. Hammett's first guitar was a Montgomery Ward catalog special.

After purchasing a 1978 Fender Stratocaster copy, Hammett attempted to customize his sound with various guitar parts, before eventually buying a 1974 Gibson Flying V. Hammett also took a job at Burger King as a youth, which he quit as soon as he had saved enough money to purchase a Marshall amplifier.

Hammett's musical interests eventually drew him into the new thrash metal genre. In 1979, he formed the band Exodus at the age of sixteen, along with vocalist Paul Baloff, guitarist Gary Holt, bassist Geoff Andrews, and drummer Tom Hunting. Exodus was an influential band in the Bay Area thrash movement. 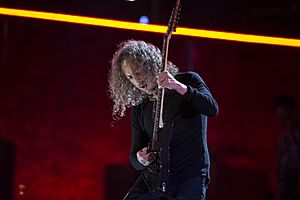 On October 1, 2012 he had his first book published, Too Much Horror Business - a collection of photos detailing Hammett's lifelong love of monster movies and horror memorabilia . Hammett has said that the book is basically all of the horror memorabilia he has managed to amass over the last 30 years, he has such a huge horror collection and thought it was the right time to share it with everyone. The 228 page hardcover features more than 300 images of Hammett's horror collection.

All content from Kiddle encyclopedia articles (including the article images and facts) can be freely used under Attribution-ShareAlike license, unless stated otherwise. Cite this article:
Kirk Hammett Facts for Kids. Kiddle Encyclopedia.