Kids Encyclopedia Facts
For other places with this name, see Union City (disambiguation).

Union City is a city in the San Francisco Bay Area in Alameda County, California, United States located approximately 20 miles south of Oakland, 30 miles southeast of San Francisco, and 20 miles north of San Jose. Incorporated on January 13, 1959, combining the communities of Alvarado, New Haven, and Decoto, the city has over 72,000 residents today and very diverse population. Alvarado is a California Historical Landmark (#503). The city celebrated its 50th Anniversary in 2009. The Cities of Fremont, Newark, and Union City make up the Tri-City Area to the south .The larger City of Hayward surrounds the city to the north. The Tri-City Area hosts many local events, along with programs for the youth.

According to the United States Census Bureau, the city has a total area of 19 square miles (49 km2), all land with no bay frontage. The Niles Cone aquifer, managed by the Alameda County Water District, supplies much of the water consumed by Union City.

The first community in what is now Union City was founded in 1850 by John and William Horner, also called "Union City." In 1854, it merged with the nearby community of New Haven to form the town of Alvarado on western side of town, named after the former Mexican governor, Juan Bautista Alvarado. Alvarado was the first county seat of Alameda County, which it soon lost to San Leandro. Further east, the town of Decoto was founded in 1870. It became a railroad hub, with the transcontinental railroad running through it. Alvarado-Niles Road one of the city largest street is named in which connects the historic Fremont district of Niles with the historic Union City district of Alvarado.

Union City is a former railroad and Steel Town with an extensive industrial heritage. The Pacific States Steel Company occupied the land behind Union City Station which is now being redeveloped into the Union City Station District Downtown. Relatives and descendants of former Pacific States steel workers receive compensation and preference when purchasing new Station District housing. The Alvarado and Decoto neighborhoods were both former railroad hubs and both still have very active railroad lines that bisect both East End and the West Side of town. Trains are a way of life in Union City and natives are accustomed to waiting for Amtrak and freight trains to cross while commuting the city thoroughfares.

In the 1950s, Alvarado and Decoto - the latter now making up the eastern side of the town - were annexation targets of the nearby communities of Newark, Hayward, and what became Fremont. In 1959, they decided to incorporate themselves into a single city, and named it after the Horners' original settlement, Union City. The city grew from 6,000 to 72000 between the years of 1959 to 2014. In 2010 the city's planning commission estimated the population would grow to 75,200 by the year 2020.

Several transit systems service Union City. AC Transit, the Dumbarton Express, and the city's own Union City Transit which started in 1974 runs 8 bus lines throughout Union City and parts of Hayward. The Bay Area Rapid Transit (BART) rail system came to Union City when the system opened in 1972. In 2007 the Union City Bart station was rebuilt and developed into Union City Intermodal Transit Station. A second entrance is planned that will provide future connections to Multimodal trains. Union City is also served by a network of high-capacity streets, with four exits on Interstate 880 (Nimitz Freeway). Highway 238 also serves the city (Mission Boulevard). The central business district in Union City runs about two blocks from Decoto Road to Union Square. This area is mostly commercial and has many transit stops, retail centers, and places to dine.

Union City has invested $100 million into an expansion of the downtown district, including development surrounding the existing BART station, which is itself under construction to link BART with passenger rail services: Capitol Corridor, Dumbarton Rail Corridor and Altamont Corridor Express (ACE). The city expects the project will add jobs and revenue.

The Bay Area Flight 93 Memorial is in Sugar Mill Landing Park. It was the first monument completed in the United States designed to honor the passengers and crew of United Airlines Flight 93, which was homeward bound for San Francisco, but was hijacked and crashed in rural Pennsylvania on September 11, 2001.

The first sugar beet factory in the United States was located in Union City, called the California Beet Sugar Company.

The Eden Landing Ecological Reserve is located at the bay shore of Union City and Hayward. Periodic waterfowl hunting is permitted.

Site of the first county courthouse

Alameda County's first courthouse was located in Union City, starting on June 6, 1853. The original courthouse was a two-story wooden building that was originally a mercantile that included a post office. It was built by A.M. Church and Henry C. Smith. In 1865 the county seat was moved to San Leandro. With the widening of Union City Blvd., the original site has since been paved over. The site is listed on the California Historical Landmarks list. 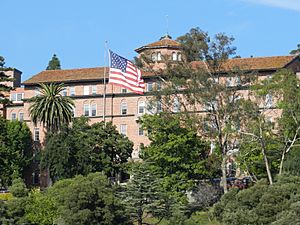 Masonic Home at Union City, a senior living community, has as its centerpiece a large brick administration building five stories high, built in the 1930s, visible from Mission Boulevard. The administration building was identified as a significant historic property in the 1974 Historic Resource Inventory of Washington Township. Interior features include a main staircase with stained glass windows, a parlor filled with antiques, and paintings of 14 U.S. presidents who were Masons. Ten more buildings have been built on this senior campus for Masons, but they are all hidden from view from Mission Boulevard by this historic significant administration building.

The Human Relations Commission, an advisory board to the Union City city council, recommends and maintains relations with international sister cities. As of 2012, six sister cities were represented:

All content from Kiddle encyclopedia articles (including the article images and facts) can be freely used under Attribution-ShareAlike license, unless stated otherwise. Cite this article:
Union City, California Facts for Kids. Kiddle Encyclopedia.