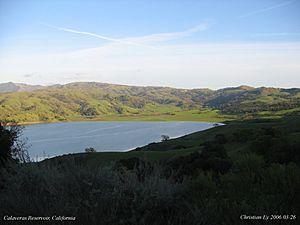 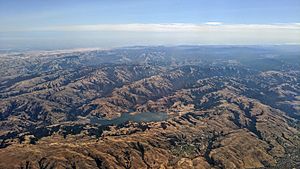 The reservoir is fed mainly by Arroyo Hondo and Calaveras Creek. Lying in the Calaveras Valley, the region is geologically active with the Calaveras Fault parallel to and to the west of the dam site. The seismic hazard forced replacement of the original dam. The replacement dam began construction in 2011 and was completed in 2019.

In the 19th century, the Calaveras Valley which the reservoir now fills was primarily an agricultural region known for its production of hay, strawberries, and tomatoes. Because of San Francisco's increasing demand for drinking water at the turn of the 20th century, the farmers in the region were forced to sell their land to the Spring Valley Water Company, which in turn sold it to the San Francisco Water Company.

The first dam on the site, built in 1913 by the Spring Valley Water Company, rapidly changed the sensitive hydrology and natural environment of the Calaveras Valley. That dam suffered a collapse of the upstream slope in 1918 due to design and material flaws. Its replacement, which stood until 2019, was the largest earth-fill dam in the world when completed in 1925. It was 245 feet high, with a length of 1200 feet at its crest. The city and county of San Francisco owns and operates the dam and reservoir for municipal water supply. Due to concerns about its seismic rating, the 1925 dam was replaced by a new dam constructed just downstream from 2014 to 2019. 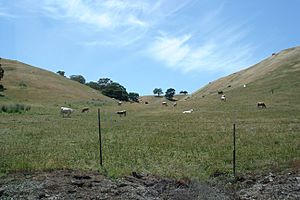 Livestock along Calaveras Road, May 2006

The reservoir is reported to contain a large population of largemouth bass, rainbow trout and other species. However, fishing is prohibited.

The San Francisco Public Utilities Commission (SFPUC) owns 36,000 acres (150 km2) in the Alameda Creek Watershed. Some lands in the watershed are leased to livestock companies for cattle ranching to control vegetation and prevent fires. Most of the land is closed to the public because of concerns over drinking water safety and quality.

The dam site has an active earthquake fault nearby, and the original 1925 dam was seismically vulnerable. If the dam had collapsed when full, it would have flooded parts of Fremont, California with a wall of water 30 ft (9.1 m) high. Dam regulators for the state of California restricted the capacity of the original dam in 2001, to mitigate the seismic threat. The capacity of the original dam was limited to about one-third of the nominal 100,000 acre-feet (120 million cubic meters).

To restore lost capacity, the San Francisco Public Utilities Commission constructed a replacement dam located 1,000 ft (300 m) downstream from the original 1925 dam. The dam replacement took twice as long (eight years instead of four years) and cost twice as much as originally scheduled. Hazardous geological conditions were discovered near the proposed west abutment in 2012 and near the proposed spillway. The dam site was weakened by at least two ancient landslides. When construction started in 2011, the budget was $420 million, and completion was expected in 2015. The seismic redesign required three million additional cubic yards (two million cubic meters) of excavation, far more than the original seven million cubic yards (five million cubic meters). The spillway had to be relocated away from one of the ancient landslides, delaying the project by another year. As of 2017, the completion had been pushed back to spring or summer 2019, and the cost had risen to $810 million.

The design of the replacement dam allows for future capacity expansion, and the core is wider than needed initially. The design allows the height to be raised by 150 ft (46 m), to quadruple the initial capacity of 100,000 acre⋅ft (120,000,000 m3). On completion of the replacement dam, a third of the old dam was removed to allow the reservoir to be impounded by the new dam instead.

The construction project allocated funds to restore populations of native fish in other parts of the watershed. A ladder for Steelhead trout (Oncorhynchus mykiss) at the dam itself was deemed infeasible. At 290 feet (88 m), it would have been the tallest fish ladder in the US and would have cost $40 million. The SFPUC did assure environmental groups that it will release water from the replacement dam to improve summer flows. A smaller fish ladder is under construction at a separate diversion dam on upper Alameda Creek, regarded as prime trout habitat. 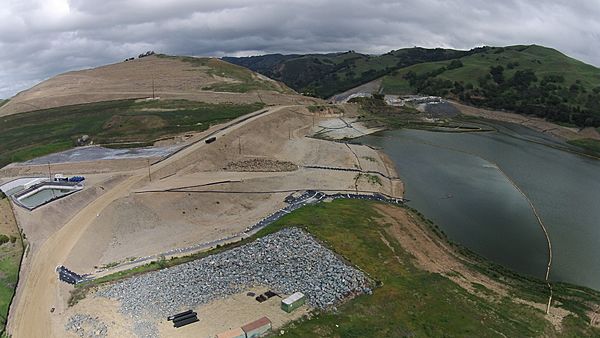 Facing legal challenges to release flows to support steelhead trout (Oncorhynchus mykiss) in the 20 miles (32 km) of Calaveras Creek below the dam, the San Francisco Public Utilities Commission (SFPUC) began steady releases after the dam was re-built in 2018. The steady flow releases, and accompanying lowered water temperatures, resulted in a sharp increase in the numbers of trout.

In the late 1980s and early 1990s, a drought affected California, and water levels in reservoirs throughout the state became extraordinarily low. By January 1991, the water at the reservoir was down 100 feet (30 m), and the aluminum body of an airplane became visible. Two skeletons were found at the site on January 5, 1991. Dental records and the plane's serial number were used to positively identify the remains as Clifford Gillman and his single-engine Ercoupe, along with Gillman's friend Robert Louviere. They had been missing since June 16, 1963. The wreck, minus the two men's remains, is still lying in the center of the reservoir.

All content from Kiddle encyclopedia articles (including the article images and facts) can be freely used under Attribution-ShareAlike license, unless stated otherwise. Cite this article:
Calaveras Reservoir Facts for Kids. Kiddle Encyclopedia.