The purple martin (Progne subis) is the largest swallow in North America. Despite their name, purple martins are not truly purple. Their dark blackish-blue feathers have an iridescent sheen caused by the refraction of incident light giving them a bright blue to navy blue or deep purple appearance. In some light they may even appear green in color.

Their breeding range extends from central Alberta down through the eastern United States. Subspecies breed in Baja California, Arizona, and New Mexico. Purple martins are migratory passerines. Most make a brief stopover in the Yucatán Peninsula or Cuba during pre-breeding migration to North America and during post-breeding migration before reaching their overwintering site in South America.

They are known for their speed, agility, and their characteristic mix of rapid flapping and gliding flight pattern. When approaching their nesting site, they will dive from the sky at great speeds with their wings tucked.

Purple martins are a kind of swallow, of the genus Progne. With an average length of 20 cm (7.9 in) and a wingspan up to 38 cm (15 in), they are also the largest amongst the 90 some species in the family Hirundinidae.

Purple martins are sexually dimorphic. Adult males are entirely black with glossy steel blue sheen, the only swallow in North America with such coloration. Adult females are dark on top with some steel blue sheen, and lighter underparts. Adults have a slightly forked tail. Both male and female purple martins exhibit delayed plumage maturation, meaning it takes them two years before they acquire full adult plumage. Subadult females look similar to adult females minus the steel blue sheen and browner on the back. Subadult males look very much like females, but solid black feathers emerge on their chest in a blotchy, random pattern as they molt to their adult plumage.

This species was first described by Carl Linnaeus in his landmark 1758 10th edition of Systema Naturae as Hirundo subis. The current genus name refers to Procne (Πρόκνη), a mythological girl who was turned into a swallow to save her from her husband. The specific subis is Latin and refers to a type of bird that breaks eagles' eggs; it may have been applied to this species because of its aggression toward birds of prey when it is nesting.

The species of this genus are very closely related, and some view the purple martin, gray-breasted martin, snowy-bellied martin, and southern martin, as a superspecies. 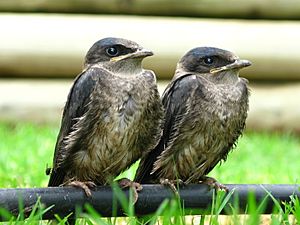 Purple martins' breeding range is throughout temperate North America. Their breeding habitat is open areas across eastern North America, and also some locations on the west coast from British Columbia to Mexico. Martins make their nests in cavities, either natural or artificial. In many places, humans put up real or artificial hollow gourds, or houses for martins, especially in the east, where purple martins are almost entirely dependent on such structures. As a result, this subspecies typically breeds in colonies located in proximity to people, even within cities and towns. This makes their distribution patchy, as they are usually absent from areas where no nest sites are provided. Western birds often make use of natural cavities such as old woodpecker holes in trees or saguaro cacti.

The purple martin migrates to the Amazon basin in winter. Its winter range extends into Ecuador but does not seem to ascend far up the Andean foothills.

The first record of this species in Europe was a single bird on Lewis, Scotland, on 5–6 September 2004, and the second was on the Azores on 6 September 2004.

There is a misconception among many people of purple martin temperament. Many people believe purple martins will defend their nesting sites against competitor species such as the house sparrow and European starling. However, both species are more aggressive and in most cases will instinctively fight to the death in order to obtain a nesting site. The house sparrow and European starling are known to kill adult martins, take over the nest and remove eggs or remaining young.

Though listed as being of least concern with the IUCN, purple martins are experiencing a unique threat to their long-term survival. Nearly all eastern species exclusively nest in artificial gourds and 'condo' units provided by human 'landlords'. A practice that has been experiencing a steady decline in the number of 'landlords' offering nesting sites. One study found that nearly 90% of landlords were 50 years of age or older, and that younger generations were not exhibiting the same enthusiasm nor possess the resources to provided martin housing for the species.

Purple martins (nominate form P. s. subis) are considered synanthropic, meaning they have developed an association with humans over time and benefit from living in close proximity to them. Through years of generational imprinting and nesting the eastern species has made a complete transition from nesting in the wild to relying on human-provided nesting sites. Initially difficult to get a colony started, once established, the colony will persist as long as nesting sites are available. Martins have a very strong "site tenacity" and if are successful in raising a brood, will often return to the same site to nest year after year.

The human-avian relationship was in place even before the population crash in the 20th century; Cherokee were known to have hollowed out gourds and hung them on wooden snags and posts in the pre-colonial era. They erected them so that the adult birds would build nests and then feed thousands of insects to their young each day that would otherwise be eating their crops. In 1808, Chickasaws and Choctaws were observed hanging gourds for martins on stripped saplings near their cabins, as were African Americans on long canes on the banks of the Mississippi.

Continual maintenance and protection is required, as European starlings and house sparrows compete with martins as cavity-nesters, and will fight with martins over nest sites. Thus, unmonitored purple martin houses are often overtaken by more aggressive, non-native species. Purple martin proponents are motivated by the concern that the purple martin would likely vanish from eastern North America were it not for this assistance.

Wintering in Brazil, Bolivia and parts of Peru, purple martins migrate to North America in the spring to breed. Spring migration is somewhat staggered, with arrivals in southern areas such as Florida and Texas in January, but showing up in the northern United States in April and in Canada as late as May.

Fall migration is also staggered, as birds head south when the breeding season is over. Some birds leave as early as July and others stay as late as October. Martins generally migrate over land, through Mexico and Central America. When not breeding, martins form large flocks and roost together in great numbers. This behavior begins just prior to the southern migration and continues on the wintering grounds.

These flocks can be so large that when they take-off from these roosts to forage the activity is detected on Doppler radar as rings. Referred to as roost rings, they start small then get larger until the birds have spread out and the ring disappears. 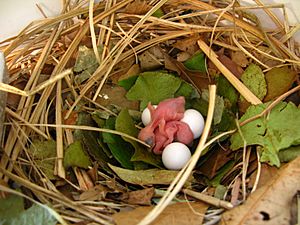 Eggs and small chicks in a nest box in Oklahoma, United States

Males arrive in breeding sites before females, and establish their territory. A territory can consist of several potential nest sites. After forming a pair, both the male and female inspect available nest sites. This process is complicated by the fact that artificial nest sites could be houses with many rooms, clustered gourds, or single gourds. The nest is made inside the cavity of such artificial structures and retains a somewhat flat appearance. The nest is a structure of primarily three levels: the first level acts as a foundation and is usually made up of twigs, mud, small pebbles and in at least a few reported cases, small river mollusk shells were used; the second level of the nest is made up of grasses, finer smaller twigs; the third level of construction composing the nest, is a small compression usually lined with fresh green leaves where the eggs are laid.

Purple martins are generally known to raise only a single brood. The average clutch size is four to six eggs per nest. Females lay one egg a day and incubation begins when the penultimate (second to last) egg is laid. Incubation lasts 15–16 days and the female is the main incubator, with some help from the male. Hatching occurs over the course of two to three days. Fledging, when the young leave the nest, occurs between 26 and 32 days after hatch day. Fledglings will continue to receive care from both parents for up to a month after fledging.

Purple martins are insectivores, primarily feed by hawking, a strategy of catching insects in the air during flight. The birds are agile hunters and eat a variety of winged insects. Rarely, they will come to the ground to eat insects. They usually fly relatively high, so, contrary to popular opinion, mosquitoes do not form a large part of their diet. Research published in 2015, however, does indicate that the purple martin feeds on invasive fire ants (Solenopsis invicta) and that they may make up a significant portion of their diet. 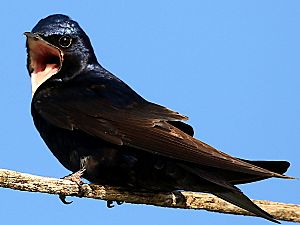 Purple martins are quite vocal. They are known to chirp, chortle, rattle, and croak.

Their various calls are described as "throaty and rich" and can be rendered as tchew-wew, pew pew, choo, cher, zweet and zwrack. The males have a gurgling and guttural courtship song, a dawn song, and even a subsong used at the end of the breeding season.

All content from Kiddle encyclopedia articles (including the article images and facts) can be freely used under Attribution-ShareAlike license, unless stated otherwise. Cite this article:
Purple martin Facts for Kids. Kiddle Encyclopedia.