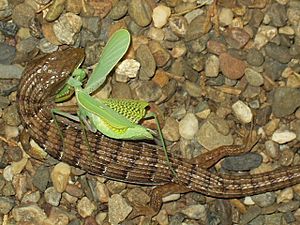 To eat insects for food is not very easy because it takes many insects to make enough food for a large insect-eating animal. Anteaters eat hundreds of ants every day.

Some omnivores like humans and bears also eat insects for food.

All content from Kiddle encyclopedia articles (including the article images and facts) can be freely used under Attribution-ShareAlike license, unless stated otherwise. Cite this article:
Insectivore Facts for Kids. Kiddle Encyclopedia.