Kids Encyclopedia Facts
This page is about the park in Alameda County, California. For other uses, see Coyote Hills. 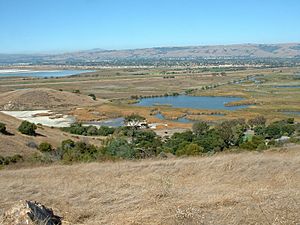 View across wetlands of the Coyote Hills park from the hills

Coyote Hills Regional Park is a regional park encompassing nearly 978 acres of land and administered by the East Bay Regional Park District. The park, which was dedicated to public use in 1967, is located in Fremont, California, USA, on the southeast shore of the San Francisco Bay. The Coyote Hills themselves are a small range of hills at the edge of the bay; though not reaching any great height, they afford tremendous views of the bay, three of the trans-bay bridges (Dumbarton Bridge, San Mateo Bridge, and the Bay Bridge), the cities of San Francisco and Oakland, the Peninsula Range of the Santa Cruz Mountains and Mount Tamalpais. In addition to the hills themselves, the park encloses a substantial area of wetlands.

There are a number of archaeological sites within the park, preserving evidence of habitation by Native Americans of the Ohlone group of tribes, including shellmounds. Access to these sites is not allowed for casual visitors, but they can be visited by arrangement.

There is a substantial network of hiking trails in the park, most of them also available to equestrians, and 3.5 miles (5.6 km) to cyclists. Most of the trails are wide fireroads that go around the hills and the marshes, and one fireroad that runs north-south through the hills ridge. There are few narrow trails which are off limits to bikers and equestrians. These trails connect to others in the east bay, and the San Francisco Bay Trail passes through the park. Cross country meets for local schools are held occasionally in the park. The waters to the south and west of the park form part of the San Francisco Bay National Wildlife Refuge, and a great deal of wildlife can be seen from the park trails.

Coyote Hills is home to the remnants of a large Project Nike missile base. It has intact facilities that are in disrepair and some still in place are used as radio transmission & microwave antenna stations. Guard stations are still visible throughout the park.

After the NIKE Missile Base was decommissioned, the Stanford Research Institute (SRI) occupied the base and area, and used the marshlands as facilities for Advanced Sonar Research, harboring many marine mammals, including dolphins. A firing range and aquifer exist on the southernmost hills. When SRI finished its mission in the mid-1960s, the site was dedicated for public use and turned over to EBRPD as manager in 1967.

The East Bay area's original inhabitants were the Ohlone Native American people. These native people were hunters and gatherers whose skills enabled them to live well off the land's natural bounty. A great number of Ohlone native descendants still live in the Newark/Fremont/Union City area. At Coyote Hills Regional Park, much of this rich wetland is preserved, along with 2,000-year-old Tuibun Ohlone Indian shellmound sites.

The Alameda Creek Trail runs 12 miles (19 km) from San Francisco Bay to the mouth of Niles Canyon. It forms the northern border of Coyote Hills park, and is really two trails in parallel: an equestrian trail on the norther levee and a bicycle trail on the southern levee.

The Visitor Center is open Wednesday through Sunday, 10 AM through 4 PM, and closed on Thanksgiving and Christmas Day. It has a store that sells brochures and gifts. The store also has a naturalist who can answer visitors' questions about the park. The center offers programs about the area, such as bird walking and native culture (e.g., making acorn soup). Clean restrooms and an outdoor picnic area are also at the center. A bird and butterfly nectar garden is adjacent to the Visitor Center.

Fees and other rules

The parking fee is $5.00 per vehicle ($4.00 per trailered vehicle. Bus fees are $25.00 each. Dogs are welcome, but must be leashed and under control at all times. There is a $2.00 fee for each dog. Guide and service dogs are exempt from the fee.

All content from Kiddle encyclopedia articles (including the article images and facts) can be freely used under Attribution-ShareAlike license, unless stated otherwise. Cite this article:
Coyote Hills Regional Park Facts for Kids. Kiddle Encyclopedia.