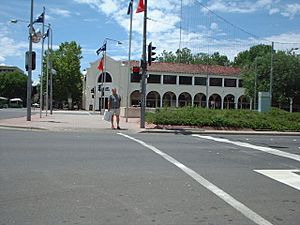 A pedestrian at the intersection of Alinga Street and Northbourne Avenue, Canberra, Australia.

A pedestrian is a person travelling on foot, whether walking or running. In modern times, the term mostly refers to someone walking on a road or footpath, but this was not the case historically. 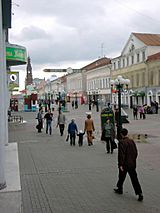 The pedestrian Bauman Street in Kazan

Nowadays, roads often have a designated footpath attached especially for pedestrian traffic, called the sidewalk in American English and the pavement in British English. There are also footpaths not associated with a road which are used only by pedestrians, especially ramblers, hikers or hill-walkers and there are roads not associated with a footpath. These footpaths, in mountains or forests, are called trails.

Efforts are underway by pedestrian advocacy groups to make it easy to be a pedestrian in new developments, especially to counteract newer developments where 20 to 30 percent do not include sidewalks. Some activists advocate large auto-free zones where pedestrians only or pedestrians and some non-motorised vehicles are allowed.

All content from Kiddle encyclopedia articles (including the article images and facts) can be freely used under Attribution-ShareAlike license, unless stated otherwise. Cite this article:
Pedestrian Facts for Kids. Kiddle Encyclopedia.