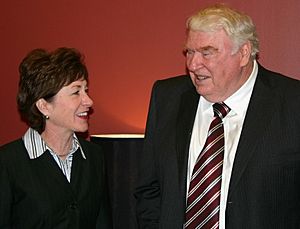 Madden with Susan Collins in December 2007

John Earl Madden (born April 10, 1936) is a former American football player, broadcaster, and commentator who was the coach of the Oakland Raiders of the National Football League (NFL) for 10 years, and after retiring from coaching became a well-known color commentator for NFL telecasts. He never had a losing season. As head coach his teams won seven division titles and one Super Bowl. He has used his commentary on many football games, including the long-running ''Madden NFL'' video football games since 1988. He is also known for his award-winning play, "The Bootleg." Madden has been inducted into the Pro Football Hall of Fame. Madden worked as a color analyst for all four major networks: CBS (1979–1993), Fox (1994–2001), ABC (2002–2005), and NBC (2006–2009).

Madden has also written several books and has served as a commercial pitchman for various products and retailers. He retired from broadcasting on April 16, 2009 to spend more time with his family.

All content from Kiddle encyclopedia articles (including the article images and facts) can be freely used under Attribution-ShareAlike license, unless stated otherwise. Cite this article:
John Madden Facts for Kids. Kiddle Encyclopedia.