Santa Maria is a city near the Southern California coast in Santa Barbara County. It is approximately 160 miles (260 km) northwest of Los Angeles. Its estimated 2014 population was 103,410, making it the most populous city in the county and the Santa Maria-Santa Barbara, CA Metro Area. The city is notable for its wine industry and Santa Maria-style barbecue. Sunset magazine called Santa Maria "The West's Best BBQ Town".

The Santa Maria Valley, stretching from the Santa Lucia Mountains toward the Pacific Ocean, was the homeland of the Chumash people for several thousand years. The Native Americans made their homes on the slopes of the surrounding hills among the oaks, on the banks of the Santa Maria River among the sycamores, and along the coast. They had unique plank-built boats, called Tomol, which they used for ocean fishing.

In 1769, the Portolá Expedition passed through the Santa Maria Valley during the first Spanish land exploration up the coast of Las Californias Province. Mission San Luis Obispo de Tolosa was established just north of the valley in 1772, and Mission La Purísima Concepción was established near present-day Lompoc in 1787. Rather than rich soil, white settlers were attracted here by the possibility of free land. In 1821, after the Mexican War of Independence, the mission lands in Santa Maria Valley were made available for private ownership under a Mexican land grant called Rancho Punta de Laguna. At the end of the Mexican War in 1848, California was ceded to the United States.

In the late 19th century, after California gained statehood in 1850, the area's rich soil attracted farmers and other settlers. By the end of the century, the Santa Maria River Valley had become one of the most productive agricultural areas in the state. Agriculture is still a key component of the economy for the city and the entire region.

Between 1869 and 1874, four of the valley's settlers, Rudolph Cook, John Thornburg, Isaac Fesler (for whom Fesler Jr. High School is named), and Isaac Miller (for whom Miller Elementary School is named), built their homes near each other at the present corners on Broadway and Main Street. The townsite was recorded in Santa Barbara in 1875. The new town was named Grangerville, then changed to Central City. It became Santa Maria on February 18, 1885, since mail was often being sent by mistake to Central City, Colorado. Santa Maria was chosen from the name Juan Pacifico Ontiveros had given to his property 25 years earlier. Streets named after the four settlers now form a 6 block square centered at Broadway and Main Street, the center of town.

Oil exploration began in 1888, leading to large-scale discoveries at the turn of the 20th century. In 1902, Union Oil discovered the large Orcutt Oil Field in the Solomon Hills south of town, and a number of smaller companies also began pumping oil. Two years later, Union Oil had 22 wells in production. Other significant discoveries followed, including the Lompoc Oil Field in 1903 and the Cat Canyon field in 1908. Over the next 80 years more large oil fields were found, and thousands of oil wells drilled and put into production. Oil development intensified in 1930s, with the discovery of the Santa Maria Valley Oil Field in 1934, right underneath the southern and western parts of the city of Santa Maria, which spurred the city's growth even further. By 1957 there were 1,775 oil wells in operation in the Santa Maria Valley, producing more than $640 million worth of oil.

Santa Maria is situated north of the unincorporated township of Orcutt, California, and south of the Santa Maria River (which serves as the line between Santa Barbara County and San Luis Obispo County). The valley is bordered on the west by the Pacific Ocean and to the east by the San Rafael Mountains and the Los Padres National Forest. The city of Guadalupe, California is approximately 9 miles (14 km) to the west of Santa Maria.

Santa Maria experiences a cool Mediterranean climate (Köppen climate classification Csb) typical of coastal areas of California north of Point Conception. The climate is mostly sunny, refreshed by the ocean breeze. Fog is common. Snow in the lowest parts of the city is virtually unknown, with the last brief flurry recorded in January 1949. The only recorded earlier snowfall was in January 1882. Rainfall averages 14 inches (360 mm) annually.

There were 22,146 households out of which 42% had children under the age of 18 living with them, 56.4% were married couples living together, 13.3% had a female householder with no husband present, and 24.8% were non-families. 20.0% of all households were made up of individuals and 9.3% had someone living alone who was 65 years of age or older. The average household size was 3.40 and the average family size was 3.85. 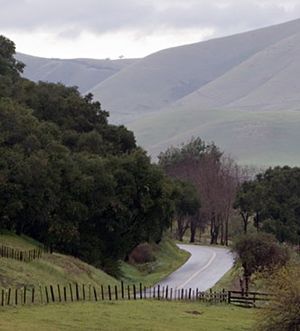 Along Foxen Canyon Road. This route provides a link between the Santa Maria and Santa Ynez Valleys

U.S. Route 101 runs through the middle of the Santa Maria Valley and is the main freeway connecting many west coast cities. It has been improved to freeway status (meaning all at-grade intersections have been eliminated) within the city of Santa Maria itself. There was recently a widening project that expanded the freeway from four to six lanes between Santa Maria Way and the highway 166 exit. The $32 million project was completed in late 2008 / early 2009.

State Route 1 runs around the western edge of the city and connects it to nearby Vandenberg Air Force Base near Lompoc. The section of 101 in the city is a freeway, and a small part of a nearby section of Highway 1 that runs between the city and the base is also a freeway, but the two freeway segments do not directly connect to each other.

State Route 135 is considered to be the major artery through the city. It comes from Los Alamos, a town to the south of Santa Maria, and it enters Orcutt and Santa Maria as an expressway. The expressway runs all the way to Santa Maria Way. Highway 135 then turns into Broadway and runs through the heart of the city and all the way up to the Santa Maria River and U.S. 101.

The Santa Maria Valley Railroad (SMVRR) is a shortline freight railroad to Guadalupe where the Union Pacific Railroad Interchange point is. Main business includes storage of railroad cars when northern California and southern California storage area are full. In the 1990s, the city proposed a Light Rail Service to replace the SMV's Right-of-way, as it's future was uncertain.

The nearest train station with long-distance Amtrak service is in Guadalupe, to which Amtrak provides bus service from Santa Maria. Amtrak's Pacific Surfliner provides twice daily service in each direction, running to San Luis Obispo to the north and to San Diego via Los Angeles to the south.

Long-distance intercity bus service is provided by Greyhound Lines. The Clean Air Express commuter bus runs between Santa Maria and Goleta as well as a line to Santa Barbara weekdays.

Santa Maria is perhaps most notable for an excellent variety of barbecued meat. The tri-tip steak has its roots in Santa Maria per side of beef. In the United States, this cut was typically used for ground beef or sliced into steaks until the late 1950s, when it became a local specialty in Santa Maria. "Santa Maria-style" barbecue is usually used in reference to the seasoning of tri-tip or other meats (most notably top sirloin, or "top block") when rubbed with salt, pepper, and spices and cooked whole on a rotisserie or grilled over local red oak wood. The side dishes complementing a typical "Santa Maria-style" barbecue generally consist of garlic bread, pinquito beans, and a salad.

Santa Maria, along with the neighboring Lompoc, Los Alamos and Santa Ynez Valleys, combine to create one of the nation's largest wine-producing regions, referred to as the Santa Barbara Wine Country.

The often foggy and windswept Santa Maria Valley is the northern most appellation in Santa Barbara County. The region's first officially approved American Viticultural Area (AVA) enjoys extremely complex soil conditions and diverse microclimates. Chardonnay and Pinot noir are two varietals which especially benefit from the ocean's influence, and are the flagship wines of this appellation.

An additional PCPA theatre is located in Solvang, California in the Santa Ynez Valley.

The Santa Maria Valley has long been a major filming location for Hollywood. Some of the films shot in the valley include:

In the Space: 1999 episode "Another Time, Another Place", the "Earth" Alphans, during their period on Earth, have built a small village in the destroyed Santa Maria, discovering that on Earth there was an Atlantis-like civilization.

All content from Kiddle encyclopedia articles (including the article images and facts) can be freely used under Attribution-ShareAlike license, unless stated otherwise. Cite this article:
Santa Maria, California Facts for Kids. Kiddle Encyclopedia.