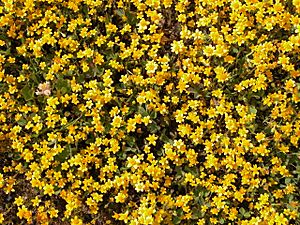 Most of the mountain range is within the Los Padres National Forest, and the northern slopes are included in the remote San Rafael Wilderness area.

Hurricane Deck is a spectacular block of sandstone that can be found deep in the San Rafael Wilderness.

Climate is moderate, with hot dry summers (rare thunderstorms) and cool to cold wet winters. Snow sometimes falls on the higher slopes between December and March during frontal passages. Annual precipitation totals are between 15 and 25 inches.

The six highest peaks of the San Rafael Mountains with more than 500 feet (150 m) of prominence, listed by height:

The mountains mainly consist of sedimentary and metamorphic rocks, of Jurassic age or younger, though there are a few regions of igneous intrusions. Several prominent faults exist, including the Big Pine Fault, which trends eastward towards the San Andreas Fault about forty miles away.

The mountains are steep and rugged, and the lower slopes are dominated by chaparral. This ecosystem is naturally adapted to large, high-severity fires every 30 to 100 years or more. Nearly every area within the San Rafael Mountains has burned within the last century, largely due to an increase in human-caused ignitions. In the more shaded and moist canyons and northern slopes oak woodlands, bigcone Douglas-fir, and Coulter pine are found. Gray pine is also interspersed across the chaparral-dominated slopes.

Above the montane chaparral and woodlands ecosystem zone are stands of conifers of the mixed evergreen forest ecosystem. These stands are composed of Jeffrey pine, ponderosa pine, Coulter pine, sugar pine, singleleaf pinyon pine, white fir, and incense cedar. Snow is common in the winter above about 6,000 feet (1,800 m), though overall the climate of the mountain range is Mediterranean, with mild rainy winters and warm, dry summers.

The earliest known residents of the San Rafael Mountains were the Chumash Indians, and evidence of their habitation can still be found by intrepid hikers in the form of pictograph rock paintings in remote areas.

In historic times, mercury mining was conducted on portions of the southern slopes. Tailings from these old mines sometimes contain high levels of mercury, and recent environmental investigations have been conducted to determine if cleanup is necessary and feasible.

The central part of the mountains is included into Santa Ynez Recreation area, a part of Los Padres National Forest, and is a popular hiking destination, with a dozen of campgrounds. 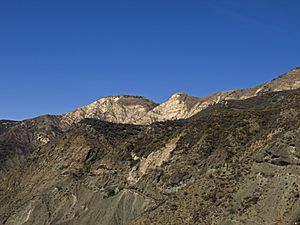 All content from Kiddle encyclopedia articles (including the article images and facts) can be freely used under Attribution-ShareAlike license, unless stated otherwise. Cite this article:
San Rafael Mountains Facts for Kids. Kiddle Encyclopedia.