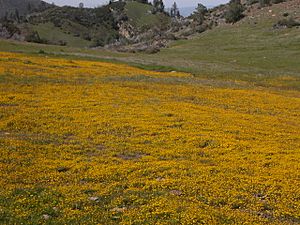 Figueroa Mountain is a summit in Santa Barbara County in the U.S. state of California. It is in the San Rafael Mountains, part of the Transverse Ranges group of ranges. The mountain is located in Los Padres National Forest.

Figueroa Mountain was named for a member of the well-known southern California family, the most eminent of whom was José Figueroa, governor of Alta California in 1833–35.

All content from Kiddle encyclopedia articles (including the article images and facts) can be freely used under Attribution-ShareAlike license, unless stated otherwise. Cite this article:
Figueroa Mountain Facts for Kids. Kiddle Encyclopedia.