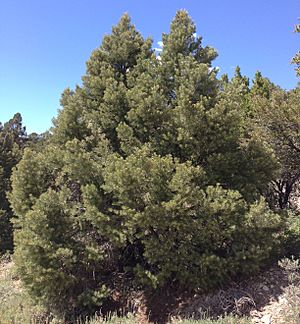 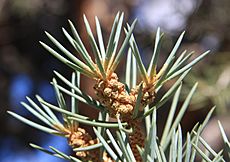 Closeup of the single needle in each sheath, with pollen cones underneath 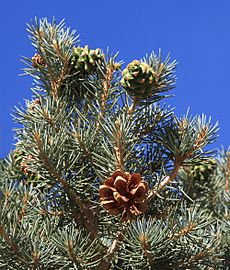 The single-leaf pinyon has a 2-year seed cone cycle: this photo, taken in July, shows a brown cone that matured and opened last year, immature green cones that were pollinated last year and will mature later this year, and this year's tiny immature cones on the branch tips.

Pinus monophylla is a small to medium size tree, reaching 10–20 m (33–66 ft) tall and with a trunk diameter of up to 80 cm (31 in) rarely more. The bark is irregularly furrowed and scaly. The leaves ('needles') are, uniquely for a pine, usually single (not two or more in a fascicle, though trees with needles in pairs are found occasionally), stout, 4–6 cm (1.6–2.4 in) long, and grey-green to strongly glaucous blue-green, with stomata over the whole needle surface (and on both inner and outer surfaces of paired needles). The cones are acute-globose, the largest of the true pinyons, 4.5–8 cm (1.8–3.1 in) long and broad when closed, green at first, ripening yellow-buff when 18–20 months old, with only a small number of very thick scales, typically 8–20 fertile scales. The cones thus grow over a two-year (26-month) cycle, so that newer green and older, seed-bearing or open brown cones are on the tree at the same time (see image at left). 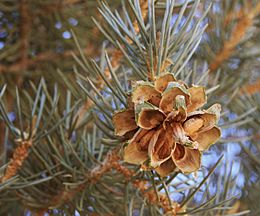 The seed cones open to 6–9 cm (2.4–3.5 in) broad when mature, holding the seeds on the scales after opening. The seeds are 11–16 mm (0.43–0.63 in) long, with a thin shell, a white endosperm, and a vestigial 1–2 mm (0.039–0.079 in) wing. Empty pine nuts with undeveloped seeds (self-pollinated) are a light tan color, while the "good" ones are dark brown. The pine nuts are dispersed by the pinyon jay, which plucks the seeds out of the open cones, choosing only the dark ones and leaving the light ones (as in image at right). The jay, which uses the seeds as a food resource, stores many of the seeds for later use by burying them. Some of these stored seeds are not used and are able to grow into new trees. Indeed, Pinyon seeds will rarely germinate in the wild unless they are cached by jays or other animals. 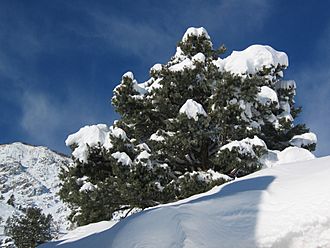 It is most closely related to the Colorado pinyon, which hybridises with it (both subsps. monophylla and fallax) occasionally where their ranges meet in western Arizona and Utah. It also (subsp. californiarum) hybridises extensively with Parry pinyon. This classification of pinyon species based only upon the presence of single-needle fascicles is brought into doubt by the reporting of trees from both the Pinus monophylla/Pinus edulis and the Pinus monophylla subsp. fallax/Pinus edulis zones as growing more single needle fascicles after dry years and more two-needled fascicles after wet years. 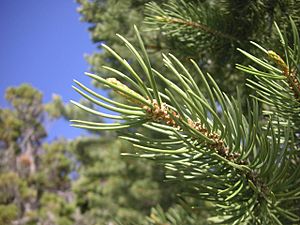 An isolated population of single-leaf pinyon trees in the Mojave Desert's New York Mountains, within the Mojave National Preserve of southeast California, has needles mostly in pairs and was previously thought to be Colorado pinyons. They have recently been shown to be a two-needled variant of single-leaf pinyon from chemical and genetic evidence.

Pinus monophylla has been studied with regard to prehistoric occurrence based upon fossil needles found in packrat middens and fossil pollen records. All three of these sub-types of single-needled pinyon have maintained distinctive ranges over the last 40,000 years, although the northerly species (Pinus monophylla) expanded greatly throughout Utah and Nevada since the end of the Pleistocene, 11,700 years ago. The southern California variety has been found to occur within Joshua Tree National Park throughout the last 47,000 years.

The edible seeds, pine nuts, are collected throughout its range; Native American of the Great Basin region commonly ate them. Various birds and mammals eat the seeds as well. The roasted cones are also edible. The Shoshoni name for the plant is Ai'-go-û-pi.

Individuals may harvest the seed for personal use on BLM and Forest Service land.

Single-leaf pinyon is also cultivated as an ornamental tree for native plant, drought tolerant, and wildlife gardens, and for natural landscaping. It is used regionally as a Christmas tree. It is rarely seen in nurseries, because it is difficult to germinate.

In 1959, it was designated Nevada's state tree, later to be joined by the Great Basin Bristlecone Pine. Its discovery is attributed to American politician and explorer John C. Frémont. 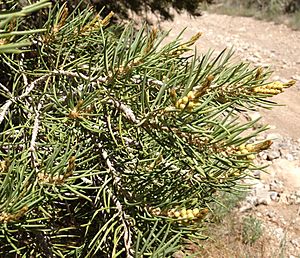 During the mid-nineteenth century, many pinyon groves were cut down to make charcoal for ore-processing, threatening the traditional lifestyle of the Native Americans who depended on them for food. When the railroads penetrated these areas, imported coal supplanted locally produced charcoal.

Following the resulting re-establishment of pinyon woodlands after the charcoal era, many cattle ranchers became concerned that these woodlands provided decreased livestock forage in grazing rangeland. Efforts to clear these woodlands, often using a surplus battleship chain dragged between two bulldozers, peaked in the 1950s, but were subsequently abandoned when no long term forage increase resulted. The habitat destruction of large areas of Pinyon woodlands in the interests of mining and cattle ranching is seen by some as an act of ecological and cultural vandalism.

All content from Kiddle encyclopedia articles (including the article images and facts) can be freely used under Attribution-ShareAlike license, unless stated otherwise. Cite this article:
Single-leaf pinyon Facts for Kids. Kiddle Encyclopedia.