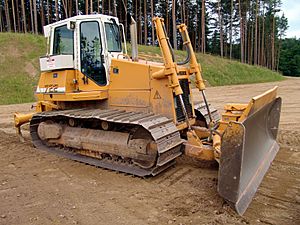 Bulldozers are crawling machines which have blades. These machines are used for pushing large amounts of dirt or rubble during demolition or construction. They have claw-like devices in the rear to loosen materials which are densely compacted. 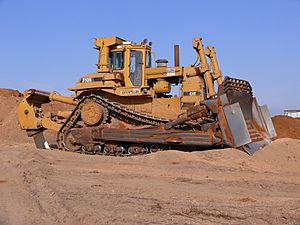 A Caterpillar D10N bulldozer equipped with a single shank ripper.

Because of these attributes, bulldozers are often used in road building, construction, mining, forestry, land clearing, infrastructure development, and any other projects requiring highly mobile, powerful, and stable earth-moving equipment.

Another type of bulldozer is the wheeled bulldozer, which generally has four wheels driven by a 4-wheel-drive system and has a hydraulic, articulated steering system. The blade is mounted forward of the articulation joint, and is hydraulically actuated.

The bulldozer's primary tools are the blade and the ripper.

The word "bulldozer" is sometimes used inaccurately for other similar construction vehicles such as a large front loader. 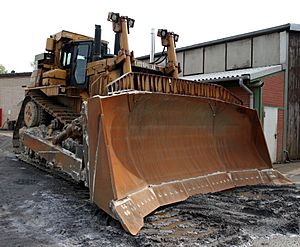 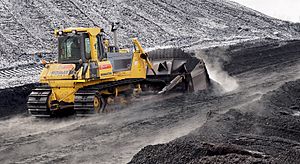 Komatsu bulldozer pushing up to 7m3 with semi-U tilt dozer

The bulldozer blade is a heavy metal plate on the front of the tractor, used to push objects, and shove sand, soil and debris. Dozer blades usually come in three varieties:

Blades can be fitted straight across the frame, or at an angle, sometimes using additional 'tilt cylinders' to vary the angle while moving. The bottom edge of the blade can be sharpened, e.g. to cut tree stumps.

Sometimes a bulldozer is used to push another piece of earth moving equipment known as a "scraper". The towed Fresno Scraper, invented in 1883 by James Porteous, was the first design to enable this to be done economically, removing the soil from the cut and depositing it elsewhere on shallow ground (fill). Many dozer blades have a reinforced center section with this purpose in mind, and are called "bull blades".

In military use, dozer blades are fixed on combat engineering vehicles and can optionally be fitted on other vehicles, such as artillery tractors such as the Type 73 or M8 Tractor. Dozer blades can also be mounted on main battle tanks, where it can be used to clear antitank obstacles, mines, and dig improvised shelters. Combat applications for dozer blades include clearing battlefield obstacles and preparing fire positions. 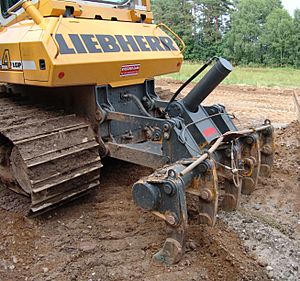 The ripper is the long claw-like device on the back of the bulldozer. Rippers can come as a single (single shank/giant ripper) or in groups of two or more (multi shank rippers). Usually, a single shank is preferred for heavy ripping. The ripper shank is fitted with a replaceable tungsten steel alloy tip, referred to as a 'boot'. Ripping rock breaks the ground surface rock or pavement into small rubble easy to handle and transport, which can then be removed so grading can take place. With agricultural ripping, a farmer breaks up rocky or very hard earth (such as podzol hardpan), which is otherwise unploughable, in order to farm it. For example, much of the best land in the California wine country consists of old lava flows. The grower shatters the lava with heavy bulldozers so surface crops or trees can be planted. Some bulldozers are equipped with a less common rear attachment referred to as a stumpbuster, which is a single spike that protrudes horizontally and can be raised to get it (mostly) out of the way. A stumpbuster is used to split a tree stump. A bulldozer with a stumpbuster is used for landclearing operations, and is often equipped with a brush-rake blade. 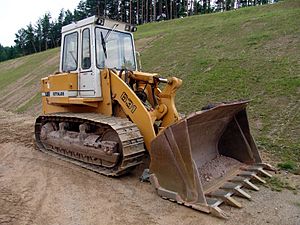 Bulldozers have been further modified over time to evolve into new machines which can work in ways that the original bulldozer cannot.

One example is that loader tractors were created by removing the blade and substituting a large volume bucket and hydraulic arms which can raise and lower the bucket, thus making it useful for scooping up earth and loading it into trucks, these are often known as a Drott, trackscavator or track loader.

Other modifications to the original bulldozer include making it smaller to let it operate in small work areas where movement is limited, such as in mining.

Some lightweight form of bulldozer are commonly used in snow removal and as a tool for preparing winter sports areas for ski and snowboard sports.

A very small light bulldozer is sometimes called a "calfdozer".

In an angledozer (image here) the blade can be pushed forward at one end to make it easier to push material away to the side.

Nevertheless, the original earthmoving bulldozers are still irreplaceable as their tasks are concentrated in deforestation, earthmoving, ground levelling, and road carving. Heavy bulldozers are mainly employed to level the terrain to prepare it for construction. The construction, however, is mainly done by small bulldozers and loader tractors. 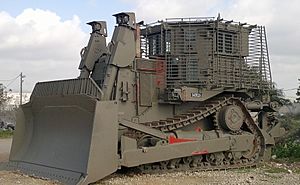 Bulldozers employed for combat engineering roles are often fitted with armor to protect the driver from firearms and debris, enabling bulldozers to operate in combat zones. The most widely documented use is the Israeli Defence Forces' (IDF) militarized Caterpillar D9, for earth moving, clearing terrain obstacles, opening routes, detonating explosive charges. The extensive use of armored bulldozers during the Second Intifada drew controversy and criticism from human rights organizations while military experts saw it as a key factor in reducing IDF casualties.

Some forces' engineer doctrines differentiate between a Low-Mobility Armoured Dozer (LMAD) and a High-Mobility Armoured Dozer (HMAD). The former is dependent on a flatbed to move it to its employment site, whereas the latter has a more robust engine and drive system designed to give it road mobility with a moderate range and speed. HMADs however normally lack the full cross-country mobility characteristics of a dozer-blade equipped tank or armoured personnel carrier.

Some bulldozers have been fitted with armor by non-government civilian operators to prevent bystanders or police from interfering with the work performed by the bulldozer, as in the case of strikes or demolition of condemned buildings. This has also been done by civilians with a dispute with the authorities, such as Marvin Heemeyer, who outfitted his Komatsu D355A bulldozer with homemade composite armor to then demolish government buildings.

A Liebherr bulldozer with a multi-shank ripper. 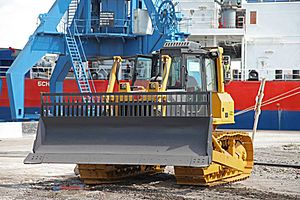 The first bulldozers were adapted from Holt farm tractors that were used to plow fields. The versatility of tractors in soft ground for logging and road building contributed to the development of the armoured tank in World War I. 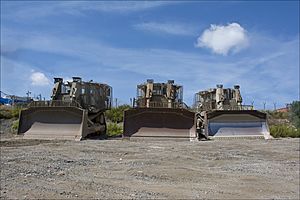 In 1923, a young farmer named James Cummings and a draftsman named J. Earl McLeod made the first designs for the bulldozer. A replica is on display at the city park in Morrowville, Kansas where the two built the first bulldozer. On December 18, 1923, Cummings and McLeod filed U.S. patent #1,522,378 that was later issued on January 6, 1925 for an "Attachment for Tractors."

By the 1920s, tracked vehicles became common, particularly the Caterpillar 60. Rubber-tired vehicles came into use in the 1940s. To dig canals, raise earth dams, and do other earth-moving jobs, these tractors were equipped with a large thick metal plate in front. (The blade got its curved shape later). In some early models the driver sat on top in the open without a cabin. There are three main types of bulldozer blades: a U-blade for pushing and carrying dirt relatively long distances, a straight blade for "knocking down" and spreading piles of dirt, and a brush rake for removing brush and roots. These attachments (home-built or built by small equipment manufacturers of attachments for wheeled and crawler tractors and trucks) appeared by 1929.

Widespread acceptance of the bull-grader does not seem to appear before the mid-1930s. The addition of power down-force provided by hydraulic cylinders instead of just the weight of the blade made them the preferred excavation machine for large and small contractors alike by the 1940s, by which time the term "bulldozer" referred to the entire machine and not just the attachment.

Bulldozers grew more sophisticated as time passed. Improvements include drivetrains analogous to (in automobiles) an automatic transmission instead of a manual transmission such as the early Euclid C-6 and TC-12 or Model C Tournadozer, blade movement controlled by hydraulic cylinders or electric motors instead of early models' cable winch/brake, and automatic grade control. Hydraulic cylinders enabled the application of down force, more precise manipulation of the blade and automated controls.

In the very snowy winter of 1946–47 in the United Kingdom, in at least one case a remote cut-off village running out of food was supplied by a bulldozer towing a big sledge carrying necessary supplies.

A more recent innovation is the outfitting of bulldozers with GPS technology, such as manufactured by Topcon Positioning Systems, Inc., Trimble Inc, or Leica Geosystems for precise grade control and (potentially) "stakeless" construction. As a response to the many, -and often varying claims about these systems, The Kellogg Report published in 2010 a detailed comparison of all the manufacturers' systems, evaluating more than 200 features for dozers alone.

The best known maker of bulldozers is Caterpillar. Komatsu, Liebherr, Case and John Deere are present-day competitors. Although these machines began as modified farm tractors, they became the mainstay for big civil construction projects, and found their way into use by military construction units worldwide. The best-known model, the Caterpillar D9, was also used to clear mines and demolish enemy structures.

Industry statistics based on 2010 production published by Off-Highway Research showed Shantui was the largest producer of bulldozers, making over 10,000 units that year or 2 in 5 crawler-type dozers made in the world. The next largest producer by number of units is Caterpillar Inc., which produced 6,400 units.

These appeared as early as 1929, but were known as "bull grader" blades, and the term "bulldozer blade" did not appear to come into widespread use until the mid-1930s. "Bulldozer" now refers to the whole machine not just the attachment. In contemporary usage, "bulldozer" is often shortened to "dozer".

All content from Kiddle encyclopedia articles (including the article images and facts) can be freely used under Attribution-ShareAlike license, unless stated otherwise. Cite this article:
Bulldozer Facts for Kids. Kiddle Encyclopedia.