A main battle tank (MBT), also called a battle tank, is a tank that is used as the most powerful combat vehicle in modern armies. They were made to replace the light, medium and heavy tanks used in World War II with just one tank. Lighter armor made it easier to put bigger guns on tanks without adding weight. Light tanks are still used in places where heavy ones cannot go. 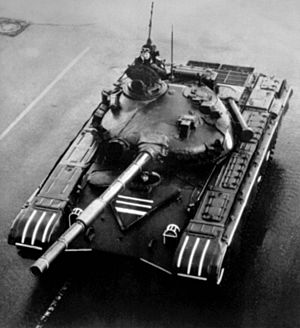 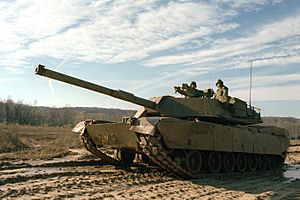 The nuclear weapon threat and other anti-tank weapons in the Cold War made countries add more protection to survive in all types of combat. Weapon designers made powerful cannons to defeat the armor.

After the Cold War, American tanks quickly defeated Iraqi tanks in the Gulf War. The American MBTs were still not as good as attack helicopters at destroying Iraqi tanks. Some said that the MBTs could not stop an enemy force from attacking.

All content from Kiddle encyclopedia articles (including the article images and facts) can be freely used under Attribution-ShareAlike license, unless stated otherwise. Cite this article:
Main battle tank Facts for Kids. Kiddle Encyclopedia.