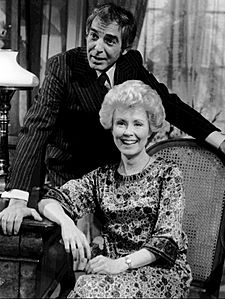 Beverlee McKinsey (August 9, 1935 – May 2, 2008) was an American actress. She is best known for her roles in television soap operas. She played Iris Carrington on Another World and the soap opera Texas. She also played Alexandra Spaulding on Guiding Light.

McKinsey was born in McAlester, Oklahoma Aug. 9, 1935. In 1956 she graduated from the University of Oklahoma with a bachelor's degree. She was an actress for over 30 years. She began acting in New York theater. McKinsey was an understudy for the Neil Simon play "Barefoot in The Park". In the 1960s she performed the lead role several times. She played opposite Robert Redford. She played the role of Honey in the 1964 London production of "Who's Afraid of Virginia Woolf?" by Edward Albee. In the late 1960s McKinsey moved to Hollywood. She made guest appearances in several television series. These included "Mannix," "The Virginian" and "Hawaii Five-O." She also played supporting roles in feature films such as "Bronco Billy" with Clint Eastwood.

McKinsey played Iris Carrington on “Another World,” broadcast on NBC From 1970 to 1979. She played the same role in 1980 and 1981 on the NBC spinoff “Texas”. From 1984 to 1992 she played Alexandra Spaulding on CBS's “Guiding Light". In 1992 she decided she wanted to quit acting. She had an "out" clause in her contract making it legal to leave the show. In 1994 she returned to acting briefly as Myrna Slaughter on ABC's “General Hospital”.

McKinsey died due to complications of a kidney transplant at age 72 in Santa Maria, California.

Between 1977 and 1980, McKinsey was nominated for four Daytime Emmy Awards for outstanding lead actress. All four were for her role as Iris on Another World.

All content from Kiddle encyclopedia articles (including the article images and facts) can be freely used under Attribution-ShareAlike license, unless stated otherwise. Cite this article:
Beverlee McKinsey Facts for Kids. Kiddle Encyclopedia.