University of Oklahoma facts for kids 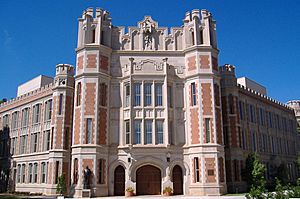 The University of Oklahoma, abbreviated OU, is a public university in the Norman, Oklahoma, United States. It has about 27,000 students enrolled, and it was started in 1890. David Boren is president of the university.

Oklahoma's athletics teams are called the Sooners. Oklahoma has 19 varsity teams, almost all of which compete in the Big 12 Conference. In men's gymnastics, a sport that the Big 12 does not sponsor, Oklahoma is a member of the Mountain Pacific Sports Federation.

All content from Kiddle encyclopedia articles (including the article images and facts) can be freely used under Attribution-ShareAlike license, unless stated otherwise. Cite this article:
University of Oklahoma Facts for Kids. Kiddle Encyclopedia.