James Earl Jones (born January 17, 1931) is an American actor. His career has spanned more than 60 years, and he has been described as "one of America's most distinguished and versatile" actors and "one of the greatest actors in American history". Since his Broadway debut in 1957, Jones has won many awards. He is also known for his voice roles as Darth Vader in the Star Wars film series and Mufasa in Disney's The Lion King, as well as many other film, stage and television roles.

Jones has been said to possess "one of the best-known voices in show business. As a child, Jones had a stutter. He said he overcame the affliction through poetry, public speaking, and acting, although it lasted for several years. A pre-med major in college, he went on to serve in the United States Army during the Korean War before pursuing a career in acting.

He has had an extensive career in film, television and theatre spanning many years. 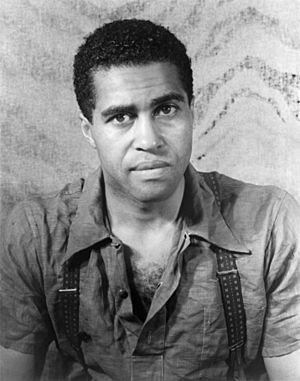 Jones' father, Robert Earl Jones, in promotional still for Don't You Want to be Free? (1938)

James Earl Jones was born in Arkabutla, Mississippi on January 17, 1931, to Ruth (Williams) Jones, a teacher and maid, and Robert Earl Jones, a boxer, butler, and chauffeur who left the family shortly after James Earl's birth. He later became a stage and screen actor in New York and Hollywood. Jones and his father did not get to know each other until the 1950s but became reconciled then. His parents were African-American, and Jones has learned they also had Irish and Native American ancestry.

From the age of five, Jones was raised by his maternal grandparents. Jones found the transition to living with his grandparents in Michigan traumatic, and developed a stutter so severe that he refused to speak. When his family moved to the more rural Brethren, Michigan, a teacher helped him overcome his stutter. He remained functionally mute for eight years until he entered high school. He credits his English teacher, Donald Crouch, who discovered he had a gift for writing poetry, with helping him end his silence. Crouch urged him to challenge his reluctance to speak. "I was a stutterer. I couldn't talk. So my first year of school was my first mute year, and then those mute years continued until I got to high school."

Jones is also known as the voice of Darth Vader in the 1977 film Star Wars: A New Hope and its sequels The Empire Strikes Back (1980) and Return of the Jedi (1983). Darth Vader was portrayed in costume by David Prowse in the film trilogy, with Jones dubbing Vader's dialogue in postproduction. At his own request, Jones was uncredited for the original releases of the first two Star Wars films, though he later would be credited for the first film in its 1997 "Special Edition" re-release.

His other voice roles include Mufasa in the 1994 Disney film The Lion King and its direct-to-video sequel, The Lion King II: Simba's Pride. He more recently voiced Mufasa in the 2015 TV pilot movie The Lion Guard: Return of the Roar. In February 2017, it was announced that Jones would again voice the character in the 2019 remake of The Lion King, which will be directed by Jon Favreau.

In 1990, Jones performed voice work for The Simpsons first "Treehouse of Horror" Halloween special, in which he was the narrator for the Simpsons' version of Edgar Allan Poe's poem "The Raven".

Jones married American actress/singer Julienne Marie in 1968, whom he met while performing as Othello in 1964. They had no children, and divorced in 1972. In 1982, he married actress Cecilia Hart, with whom he had one child, son Flynn Earl Jones. Hart died on October 16, 2016. In April 2016, Jones spoke publicly for the first time in nearly 20 years about his long-term health challenge with type 2 diabetes. He has been dealing with diabetes since the mid 1990s.

All content from Kiddle encyclopedia articles (including the article images and facts) can be freely used under Attribution-ShareAlike license, unless stated otherwise. Cite this article:
James Earl Jones Facts for Kids. Kiddle Encyclopedia.