Lompoc ( LOM-pohk; Chumash: Lum Poc) is a city in Santa Barbara County, California. Located on the Central Coast, Lompoc had a population of 44,444 in the 2020 census.

Lompoc has been inhabited for thousands of years by the Chumash people, who called the area Lum Poc, meaning "stagnant waters" or "lagoon" in the local Purisimeño language. The Spanish called the area Lompoco after Fermín de Lasuén had established Mission La Purísima in 1787. In 1837, the Mexican government sold the area as the Rancho Lompoc land grant. Following the American Conquest of California, multiple settlers acquired the Lompoc Valley, including William Welles Hollister, who sold the land around the mission to the Lompoc Valley Land Company, which established a temperance colony which incorporated in 1888 as Lompoc. Lompoc is often considered a military town because it is near Vandenberg Space Force Base.

Prior to the Spanish conquest, the area around Lompoc was inhabited by the Chumash people. La Purisima Mission was established in 1787 near what is now the southern edge of the city. Purisimeño, a Chumashan language, was spoken in the region during the mission period. After an earthquake destroyed the mission in 1812, it was relocated to its present location 1 mile (1.6 km) northeast of the present city. After independence from the Spanish Empire, the First Mexican Empire was established in 1821. The Mexicans secularized the Spanish missions in 1833, and La Purisima Mission gradually fell into ruins.

The coastal branch of the Southern Pacific Railroad replaced ship transportation around 1900. In 1893, a diatomaceous earth mine opened in the southern hills in Miguelito Canyon. It became (and still is) the largest marine diatomite mine in the world, and at one time was the largest employer in the valley. In the 1940s, Grefco, another diatomaceous earth company, moved to Lompoc. It ceased operations in 1998, but the remnants of its mine can still be seen at the northeast end of town. In 1909, the Sibyl Marston—at the time, the largest steam schooner built on the West Coast—sank nearby while carrying 1,100,000 board feet (2,600 m3) of lumber. Many of the older Lompoc homes were built with lumber from the shipwreck. The wreckage can still be seen south of Surf Beach.

A paved road linked Lompoc to Buellton and the rest of California around 1920. In 1923, the Honda Point disaster, the U.S.'s largest peacetime naval accident, occurred just off the coast; nine U.S. destroyers ran aground, killing 23 people. During the Great Depression, La Purisima Mission was restored by the Civilian Conservation Corps (CCC). During World War II, the coast west of Lompoc was the site of Camp Cooke, a United States Army training camp where large units could practice maneuvers.

Lompoc grew slowly until 1958, when the United States Air Force announced that the former Camp Cooke would be a test site for the Thor family of intermediate-range ballistic missiles and the first operational base for the SM-65 Atlas, an intercontinental ballistic missile. The city then began to grow rapidly to provide housing for thousands of civilians and contractors employed at what was soon renamed Vandenberg Air Force Base. It was the first missile base of the United States Air Force.

The Space Shuttle program was slated to begin launches in the late 1980s, and the city experienced a boom in restaurant and hotel construction in anticipation of tourists coming to see shuttle launches. However, when the Challenger exploded during take-off from Cape Canaveral in 1986, the West Coast shuttle program was terminated, sending Lompoc into a severe recession.

Today, Lompoc is called "The City of Arts and Flowers" and is also becoming known for its wines. 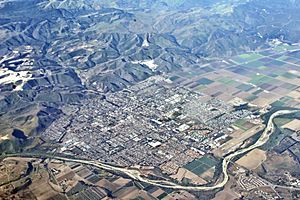 Lompoc from the air in 2007, looking SW. A large diatomaceous earth quarry in the Monterey Formation is just outside (south) of Lompoc. The nearly-dry Santa Ynez River flows west to the Pacific, at bottom of frame.

Most of the city is in the valley of the Santa Ynez River, at an elevation of about 80–100 feet (25–30 meters); recent expansion has been to the north, on higher ground known as Vandenberg Village, with elevations of 150–300 feet (50–100 meters). Like most rivers in Southern California, the Santa Ynez River does not have a surface flow for most of the year. Underground flow in the sandy river bed recharges the aquifer beneath the city, from which nine wells (with a tenth one planned) supply the city with water. Unlike many other cities in Southern California, Lompoc is not connected to the State Water Project. 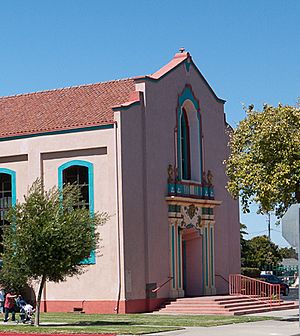 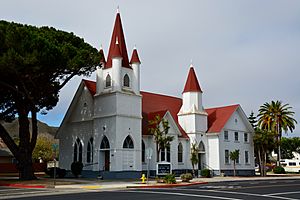 Temple Baptist Church was originally built as two churches in the 1870's, which were unified in 1908.

State Route 1 is the major north–south artery through Lompoc. State Route 246 heads east to Buellton and the Santa Ynez Valley.

The Surf train station is located to the west at Surf Beach and is served by Amtrak's Pacific Surfliner line. Thruway Motorcoach buses stop in town. Lompoc is also served by City of Lompoc Transit, the Clean Air Express to Santa Barbara/Goleta, and the Breeze Bus to Buellton/Solvang and Santa Maria.

The Lompoc Valley Flower Festival, held the last week of June, features a parade, carnival and craft show. In 2002, the Bodger Seed Company planted a "floral flag" as a tribute after the September 11 attacks. The "flag" was 740 feet by 390 feet, covered 6.65 acres, and was estimated to contain more than 400,000 larkspur plants.

The Lompoc arts scene features a number of musicians and bands, ranging from singer-songwriters to psychedelic blues-rock bands. At the center of this scene is Howlin’ Byroon’s Music Exchange, a music store and frequent venue for Lompoc’s musicians. The shop opened in May 2009 and offers guitar lessons, consigned musical instruments and live performances.

One of Lompoc’s most successful musical artists is the rock band Saint Anne’s Place, which was formed in 2008 and originally featured Jacob Cole, Samuel Cole, JT Wild and Clive Hacker. Today, its members are the Coles and their cousin, Joel, a bassist. They grew up playing in their families' blues bands and released their first EP, Speak Easy, in 2011. The band’s music has been described as a "blistering yet rustic mix of blues, psychedelia, and folk rock with the chops of players twice their senior". In 2011, they won the Santa Barbara Independent battle of the bands. They released their second EP, The Earth Shaker, in December 2012 to positive reviews by the local media.

Emily Wryn is a Lompoc songwriter whose music has been featured on NPR’s Morning Becomes Eclectic. Her first EP, Head on Straight, was released in February 2012, and she played at the Indie Week festival in Ireland in April 2014. Wryn also collaborates with a local band, Saint Anne’s Place, in a group called The Lights Electric.

The Lompoc Theatre, which opened in 1927, was owned and operated by the Calvert family for many years. It encountered financial trouble in the 1970s because of competition from multiplexes and television. The last time a movie was shown on its screen was in 1985.

In July 2003, a non-profit group, the Lompoc Housing and Community Development Corporation, announced plans to restore the theater. With the assistance of the city, the LHCDC was able to raise funds to buy the theater. By March 2008, the cost of renovating the building was estimated at just under $10 million. The LHCDC was unable to raise the money needed for renovations, and the building accumulated three liens. It was eventually sold to a grassroots group called the Lompoc Theatre Project, which hopes to reopen the theatre in 2017. 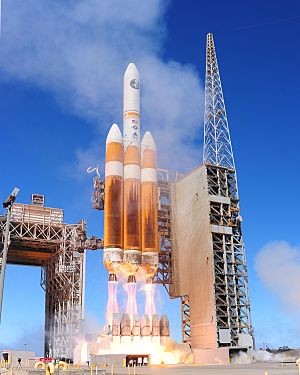 Vandenberg Space Force Base is a large contributor to the local economy.

Vandenberg Space Force Base dominates the economy, directly employing more Lompoc residents than any other employer, and contributing $1.7 billion to the regional economy. Other mainstays of the economy include the Federal Correctional Institution, the diatomaceous earth mine (today owned by Imerys), the Lompoc Oil Field and associated oil processing facilities north of town, and agriculture (especially seed flowers and vegetables).

Wine production and wine tourism make up an expanding agricultural sector. Lompoc Valley is the gateway to the Sta. Rita Hills AVA wine appellation, internationally recognized for premium pinot noir and chardonnay. Thirty premium boutique wine labels are produced in Lompoc. Numerous other wineries are located along State Route 246 and on Santa Rosa Road. Tasting rooms are located in various parts of Lompoc.

Since the end of the Cold War, many workers employed in Santa Barbara and Goleta have moved to Lompoc to take advantage of lower housing costs, effectively making Lompoc a bedroom community of Santa Barbara. The character of the town has changed considerably with the growth associated with this demographic shift. In addition, new housing developments are spreading into the adjacent hills on the north side of town.

Lompoc is served by the Lompoc Unified School District.

The two high schools in the area are Cabrillo High School and Lompoc High School.

All content from Kiddle encyclopedia articles (including the article images and facts) can be freely used under Attribution-ShareAlike license, unless stated otherwise. Cite this article:
Lompoc, California Facts for Kids. Kiddle Encyclopedia.