The valley has a population of about 20,000 residents living in the communities of Solvang, Los Olivos, Santa Ynez, Buellton, and Ballard.

The 2004 film Sideways was set (and shot on location) in the Santa Ynez Valley. Since then, visits from tourists looking to recreate the experiences of the fictional characters Miles and Jack, have become common. Fans of the movie can often be seen making a pilgrimage from the Buellton Days Inn to the Hitching Post restaurant. Other movies that have been filmed in the Santa Ynez Valley include indie film "Flying Lessons" featuring Michael O’Neill, Maggie Grace, and Hal Holbrook, “Michael Jackson: The Untold Story of Neverland", “Uncorked” /Hallmark/Larry Levinson; “Bad Girls”; “It’s Complicated”/Universal; Nitro Circus/MTV; “Inside Luxury Travel”; “The Othersiders”/Red Varden Studios;“More to Love”; “Back in Wedding Shape”; “You’re Hired”; “Kathy Griffin Season 2”; and “Somewhere” Movie locations 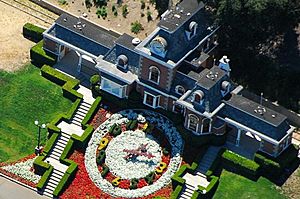 An estate in the Valley, five miles from the town of Los Olivos, California, was one of the filming locations for a 1983 video of the song "Say Say Say", featuring Michael Jackson, Paul McCartney and Linda McCartney. At the time, it was called Sycamore Valley Ranch. According to La Toya Jackson, Michael expressed interest in someday buying the property. In 1988, he would do so, renaming it Neverland Ranch. The singer sold the property prior to his death and in 2017, the estate, again Sycamore Valley Ranch (5225 Figueroa Mountain Road, Los Olivos), was for sale at an asking price of $67 million. 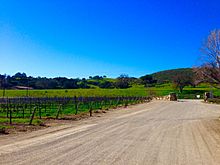 The economy of the Santa Ynez Valley is driven by agriculture (particularly viticulture), the equine industry, and tourism.

Horses are seen throughout the valley and a historic Western atmosphere is kept alive. Notable ranches include Monty Roberts' Flag Is Up Farms, River Edge Farm (thoroughbreds), and the nationally known Alamo Pintado Equine Medical Center. This valley is noted for having over 52 different breeds of horses, plus 28 veterinarians.

Tourists often visit the valley for its attractions including numerous art galleries, wine tasting rooms, and antique stores as well as resorts such as the Alisal Guest Ranch, Lake Cachuma, PCPA's Theatrefest, and the Chumash Casino. Because of good weather year round, many participate in outdoor activities such as hiking in the nearby Los Padres National Forest or bicycling throughout the valley.

All content from Kiddle encyclopedia articles (including the article images and facts) can be freely used under Attribution-ShareAlike license, unless stated otherwise. Cite this article:
Santa Ynez Valley Facts for Kids. Kiddle Encyclopedia.