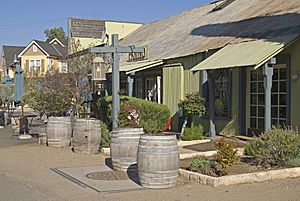 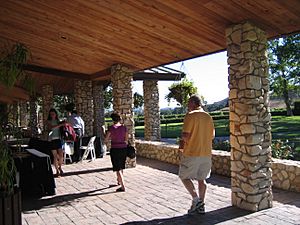 Los Olivos is a census-designated place in the Santa Ynez Valley of Santa Barbara County, California. The ZIP Code is 93441, and the community is inside area code 805. The population was 1,132 at the 2010 census.

Sometime around 1880, on a bluff overlooking Alamo Pintado Creek, just north of the town of Ballard, a two-story house was built, with a wide, covered front porch and neatly symmetrical arched windows in the center gable, situated on prime farmland. It became the property of twenty-two-year-old Alden March Boyd, of Albany, New York, when he paid $8,000 for "157 acres, more or less, together with the dwelling house," in 1885. He planted five thousand olive trees, and called it Rancho De Los Olivos. The 1880s were a boom time for California. On November 16, 1887, the Pacific Coast Railway line extension from Los Alamos was completed. The developers of the narrow-gauge railway first named their town El Olivar, then El Olivos, and finally Los Olivos, after Boyd's nearby ranch.

Los Olivos is one of five communities (with Ballard, Buellton, Solvang, and Santa Ynez) that make up the Santa Ynez Valley. The town is near SR 154, a scenic road from Santa Barbara over San Marcos Pass, through the coastal Santa Ynez Mountains. Los Olivos was connected by the narrow gauge railroad to points north as far as San Luis Obispo until the train made its last run in 1934. The southern terminus of the railroad was in front of Mattei's Tavern, where a stagecoach line continued over San Marcos Pass into Santa Barbara. The tavern is still in operation, and is one of the highlights of the area, with a well-respected restaurant and historic charm.

Los Olivos is renowned for its wineries and tasting rooms. Starting in Los Olivos and stretching north is the Foxen Canyon Wine Trail.

In May 1986, Los Olivos was used as the location setting for the fictional town of "Mayberry" in the made-for-TV movie Return to Mayberry, based on the popular 1960s sitcom The Andy Griffith Show. Several locations in Los Olivos were featured in the 2004 movie Sideways. The Los Olivos Grand Hotel, built in 1985, is now Fess Parker's Wine Country Inn, owned by former Daniel Boone and Davy Crockett star, Fess Parker.

Under the Köppen Climate Classification, "dry-summer subtropical" climates are often referred to as "Mediterranean". Los Olivos has a mean yearly temperature of 61.6 °F (16.4 °C). The average high temperature in the summer months is 92 °F (33.3 °C), while the average low temperature in the winter months is 39.5 °F (4.2 °C). Summers are dry with little to no rain falling from June through September. Winters are mild and wet with the majority of the yearly precipitation (nearly 80%) falling from December through March.

All content from Kiddle encyclopedia articles (including the article images and facts) can be freely used under Attribution-ShareAlike license, unless stated otherwise. Cite this article:
Los Olivos, California Facts for Kids. Kiddle Encyclopedia.