His 60-year acting career began in films in 1943. He signed up with Warner Bros. at age 25 as a minor contract player, he also enjoyed a successful television career, starring in three television series, spanning four decades.

Forsythe was born in Penns Grove, New Jersey to Blanche Materson (née Blohm) and to Samuel Jeremiah Freund. Forsythe was the oldest of three. Forsythe was raised in Brooklyn, New York. He graduated from Abraham Lincoln High School in Brooklyn at the age of 16, and began attending the University of North Carolina at Chapel Hill. In 1936 at the age of 18, he took a job as the public address announcer for Brooklyn Dodgers games at Ebbets Field, confirming a childhood love of baseball. 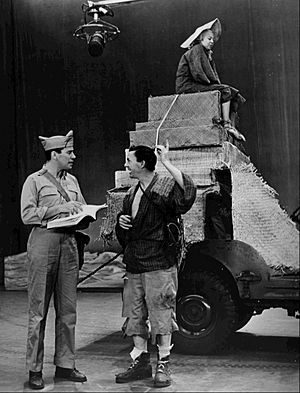 Forsythe's movie career began in 1943 in the movie Northern Pursuit and since then he had appeared in many movies such as; Destination Tokyo, Escape from Fort Bravo, Madame X, Topaz, Scrooged, and his final movie was the 2003 movie Charlie's Angels: Full Throttle that is the sequel to the movie that is based on the television series Charlie's Angels in which Forsythe starred in.

Forsythe had starred in television series, but his most notable television works is in Dynasty as Blake Carrington and as Charles Townsend in the hit series Charlie's Angels. Forsythe was also in The Powers That Be, and was a Miss Universe host in 1989.

Forsythe has won a Golden Globe Award for Best Actor in a Television Series Drama in 1984 for his role in Dynasty.

Forsythe died on April 1, 2010 from complications of pneumonia in Santa Ynez, California. He was 92 years old. His widow Nicole Carter died 40 days later. He is buried at Oak Hill Cemetery in Santa Barbara, California. He is survived by his son, his two daughters, six grandchildren, and four great-grandchildren. 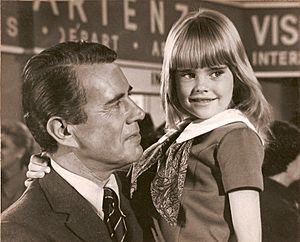 Melanie Fullerton and John Forsythe during To Rome With Love 1969 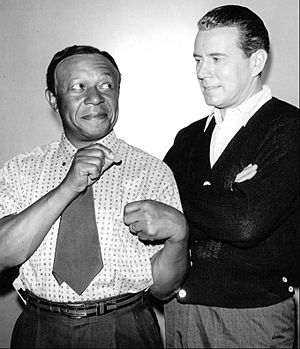 All content from Kiddle encyclopedia articles (including the article images and facts) can be freely used under Attribution-ShareAlike license, unless stated otherwise. Cite this article:
John Forsythe Facts for Kids. Kiddle Encyclopedia.