Jaclyn Ellen Smith (born October 26, 1945) is an American actress and businesswoman. She is known for her role as Kelly Garrett in the television series Charlie's Angels (1976–81), and was the only original female lead to remain with the series for its complete run. She reprised the role with a cameo appearance in the 2003 film Charlie's Angels: Full Throttle. Beginning in the 1980s, she began developing and marketing her own brands of clothing and perfume.

Smith began her career in 1969 in television commercials. In 1976, she was cast in Charlie's Angels, alongside Kate Jackson and Farrah Fawcett (then billed as Farrah Fawcett-Majors). The show propelled all three to stardom, including an appearance on the front cover of Time magazine. 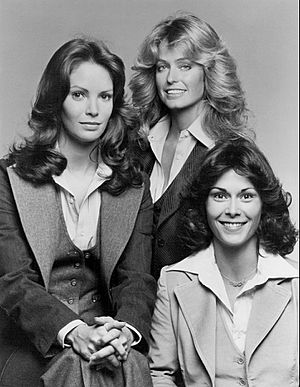 On March 21, 1976, Smith first played Kelly Garrett in Charlie's Angels; the show was aired as a movie of the week, starring Smith, Kate Jackson and Farrah Fawcett as private investigators for Townsend Associates, a detective agency run by a reclusive multi-millionaire whom the women had never met. Voiced by John Forsythe, the Charles Townsend character presented cases and dispensed advice via a speakerphone to his core team of three female employees, to whom he referred as "Angels". They were aided in the office and occasionally in the field by two male associates. The series formally debuted on September 22, 1976, and ran for five seasons.

The show would become a big success not only in the U.S. but, in successive years, in syndication around the world, creating much merchandise, particularly in the show's first three seasons, including several series of bubble gum cards, two sets of fashion dolls, numerous posters, puzzles, and school supplies, novelizations of episodes, toy vans, and a board game, all featuring Smith's likeness. The "Angels" also appeared on the covers of magazines around the world, from countless fan magazines to TV Guide (four times) to Time magazine.

Smith has been married four times. Her first marriage was to actor Roger Davis (1968–1975). She married Dennis Cole, an actor who appeared on Charlie's Angels. Smith married filmmaker Tony Richmond in 1981, with whom she had two children, Gaston (born 1982) and Spencer Margaret (born 1985), before divorcing Richmond in 1989. Smith has been married to Houston cardiothoracic surgeon Dr. Brad Allen since 1997. 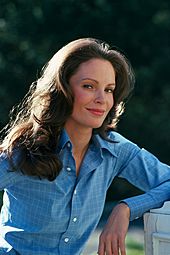 Smith during a photo session in 1977

All content from Kiddle encyclopedia articles (including the article images and facts) can be freely used under Attribution-ShareAlike license, unless stated otherwise. Cite this article:
Jaclyn Smith Facts for Kids. Kiddle Encyclopedia.