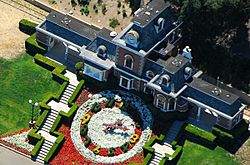 Aerial photo of the train station on Neverland Ranch

Neverland Ranch is a property in Santa Barbara County, California, United States. In 1987 Michael Jackson purchased it for an estimated $19.5 million USD. He lost the property by 2007. The 2,700-acre ranch is currently for sale for $100 million.

The property has been renamed Sycamore Valley Ranch. The Normandy-style mansion and the train station with the floral clock are still there. The amusement park has been removed. Also the zoo animals have been relocated. The private fire department on the ranch is no longer staffed with firemen. The property is being sold by the real estate investment company, Colony Capital.

All content from Kiddle encyclopedia articles (including the article images and facts) can be freely used under Attribution-ShareAlike license, unless stated otherwise. Cite this article:
Neverland Ranch Facts for Kids. Kiddle Encyclopedia.