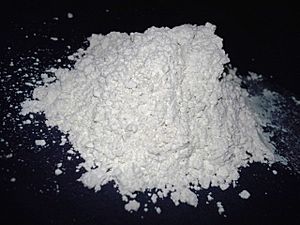 A sample of food-grade diatomaceous earth

Diatomaceous earth, also known as diatomite, kieselguhr, kieselgur, and Celite, is a naturally occurring, soft, chalk-like, sedimentary rock that is easily crumbled into a fine white to off-white powder. This powder has an abrasive feeling similar to pumice powder and is very light-weight due to its high porosity. It is made primarily of silica and consists of fossilized remains of diatoms, a type of hard-shelled algae. It is used as a filtration aid, as a mild abrasive, as a mechanical insecticide, as an absorbent for liquids, as cat litter, and as a component of dynamite. Heat resistant as well, kieselguhr can be used as an insulator.

The most common use (68%) of diatomaceous earth is a filter medium, especially for swimming pools. Diatomaceous earth has a high porosity because it is made of microscopically small coffin-like hollow particles. It is used in chemistry as a filtration aid to filter very fine particles that would otherwise pass or clog the filter paper. It is also used to filter water and other liquids such as beer. It can also filter syrups and sugar. Other industustries such as paper, paints, ceramics, soap, and detergents use it as a filling material.

The oldest use of diatomite is as a very mild abrasive and for this purpose has been used in toothpaste and metal polishes.

Diatomaceous earth is also used as an insecticide due to its abrasive properties. The fine powder causes small cuts in the waxy outer layer of insects, causing them to dehydrate. In addition to insects, this also works against gastropods and is commonly employed in gardening to defeat slugs. Beekeepers are apparently experimenting with it to keep small hive beetles from breeding. It is sometimes mixed with an attractant or other additives to increase its effectiveness. Medical grade diatomaceous earth is sometimes used to de-worm both animals and humans.

Its absorbent qualities make it useful for spill cleanup and the U.S. Center for Disease Control recommends it to clean up toxic liquid spills.

More recently, diatomaceous earth has been employed as a primary ingredient in a type of cat litter. The type of silica used in cat litter comes from freshwater sources and does not pose a significant health risk to pets or humans.

In 1867, Alfred Nobel discovered that nitroglycerin could be made much more stable if absorbed in diatomaceous earth. He patented this mixture as dynamite.

The absorbent qualities of diatomaceous earth can result in a significant drying of the hands if handled without gloves. The saltwater form contains the highly crystalline form of silica resulting in sharp edges. The sharpness of this version of the material makes it dangerous to breathe and a dust mask is recommended when working with it.

All content from Kiddle encyclopedia articles (including the article images and facts) can be freely used under Attribution-ShareAlike license, unless stated otherwise. Cite this article:
Diatomaceous earth Facts for Kids. Kiddle Encyclopedia.