This appellation is the oldest in this portion of California. Grape growing in this region dates back to the Mexican Colonial period of the 1830s. In the late 1960s commercial vineyards were planted to supply wineries around the state. Since then, vineyards in the valley have come to encompass 7,500 acres (3,000 ha).

The Santa Maria Valley is a natural funnel-shaped valley opening west to the Pacific Ocean. The elevation of the area ranges from approximately 200 feet (60 m) at the intersection of Highway 101 and the Santa Maria River to approximately 3,200 feet (980 m) at Tepusquet Peak. The grapes that are grown within the area are on the valley floor at an approximate elevation of 300 feet (90 m) and on the slopes and rolling hillsides up to an elevation of 800 feet (240 m). The soils within the area range in texture from a sandy loam to clay loam and are free from adverse salts.

Since the valley opens to the ocean, there is no opposition to the sea fog that moves in overnight, engulfing lower lying vineyards, and often lingering into mid-day. This creates a cool growing environment that is a Region I on the Winkler Scale. The valley features a long growing season and very little rainfall, meaning grapes have extensive time to build flavor on the vine.

Owing to the cool growing climate, the valley is best known for its Pinot noir, Syrah, Chardonnay, and Pinot blanc. 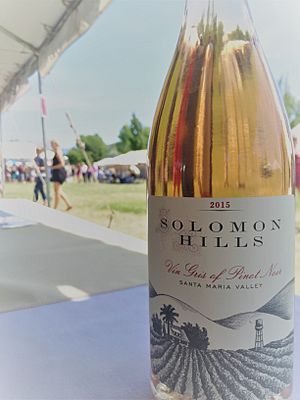 Solomon Hills Vineyard was one of the vineyards included with the expansion of the Santa Maria AVA.

All content from Kiddle encyclopedia articles (including the article images and facts) can be freely used under Attribution-ShareAlike license, unless stated otherwise. Cite this article:
Santa Maria Valley AVA Facts for Kids. Kiddle Encyclopedia.