According to the United States Census Bureau, the city has a total area of 7.1 square miles (18 km2). Pleasant Hill has a varied landscape with some valleys and rolling hills. In undisturbed wilderness, oak woodlands and mixed woods can be found. It is located in the central East San Francisco Bay.

This region has warm and dry summers, with no average monthly temperatures above 71 degrees Fahrenheit (22 degrees Celsius) According to the Köppen Climate Classification system, Pleasant Hill has a warm-summer Mediterranean climate, abbreviated "Csb" on climate maps. Winter daytime temperatures tend to be in the fifties and sixties, and summers range in the high seventies to upper eighties, occasionally reaching the low nineties. On very rare occasions, the temperatures can reach the one hundred degree range during extreme heat waves. Freezing in winter is rare, but it does happen. Summer fog is occasional but winter fog is very common.

This area began to be developed more in the 1920s, as former agricultural land was subdivided for housing. Monument Boulevard was named after the Soldiers Memorial Monument to commemorate soldiers of the Great War. It was erected on December 11, 1927. The monument depicts one black and three white soldiers. It is 45 feet (14 metres) tall, constructed of formed concrete, and weighs 150 tons. In 1954 the monument was moved to its current site at Boyd Road and Contra Costa Boulevard to make way for upcoming highway construction.

Developed largely in the years following World War II, this area did not have a post office until 1948. The city incorporated in 1961. 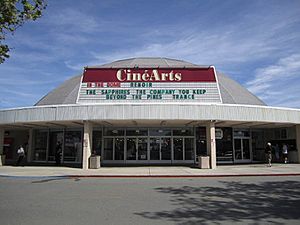 On February 21, 1967, Century 21 Theaters opened an 895-seat dome theater between Monument Boulevard and Hookston Road (I-680 was later constructed passing west of here). Visible from the freeway after it was constructed, the futuristic dome-topped cinema became an iconic landmark for the newly incorporated city. The theater was designed by prolific Bay Area architect Vincent G. Raney. It had a distinctive 50-foot-high domed ceiling and oversized curved screen. The theater was initially built to showcase the Cinerama widescreen process developed in the 1950s. The screen was later updated to standard flat-screen. In 1973, four additional single-screen auditoriums were added to the front of the building. Renamed as Century 5 Theatres, it continued to be known familiarly as the Dome.

The city hall of Pleasant Hill, completed in the late 20th century, has won several awards for architectural design.

For most of its history, Pleasant Hill did not have a true downtown or Main Street. In 1991, the city began planning the redevelopment of the area around the intersection of Monument and Contra Costa boulevards. In July 2000, Downtown Pleasant Hill finally opened. The privately owned and operated outdoor shopping center was designed to resemble a typical small Main Street. 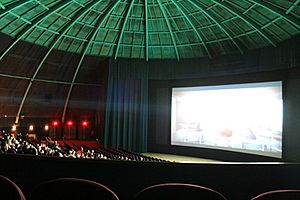 Interior of the CinéArts "Dome" Theater on its last night of operation – April 21, 2013

Starting in 2003, CinéArts operated the former Century 5 Theatres, screening primarily independent and foreign films. Due to changes in viewing habits, as many people screened movies at home, business continued to decline. The theater's property owner, SyWest Development, closed the Dome on April 21, 2013. On its last night of operation, CinéArts screened Stanley Kubrick's classic 2001: A Space Odyssey.

Sywest gained approval by the Pleasant Hill City Council for its proposal to tear down the theater and redevelop the property for a two-story, 73,000+ square-foot building to house a Dick's Sporting Goods. Supporters of the theater submitted two separate appeals to overturn the approval of demolition: one by a resident of Pleasant Hill, and one by Save the Pleasant Hill Dome (SPHD) organization. Both appeals were voted down by a majority of the city council; Mayor Michael G. Harris and councilmember Ken Carlson voted in favor of the appeal. SyWest had the Dome demolished on May 8, 2013, precluding any further court action.

The Gregory Gardens subdivision developed in 1950 required purchasers of new homes to accept a Covenant that restricted ownership to Caucasians (such provisions have since been ruled as unconstitutional). The Covenant also limited the structures that could be built, animals allowed on premises, and commercial activities.

Pleasant Hill used a system of environmental planning at a relatively early stage of its modern growth. Notably the city authorized a study in the 1980s of hillside development, which included detailed mapping of biota, geotechnical hazards, sound levels and other environmental constraints. These studies were used to establish appropriate zoning and development densities for all the principal undeveloped hillside areas within the city.

All content from Kiddle encyclopedia articles (including the article images and facts) can be freely used under Attribution-ShareAlike license, unless stated otherwise. Cite this article:
Pleasant Hill, California Facts for Kids. Kiddle Encyclopedia.