Farmersville is a city in the San Joaquin Valley in Tulare County, California, United States, just to the east of Visalia. The population was 10,588 at the 2010 census, up from 8,737 at the 2000 census.

The city hosts many events throughout the year, including a Fall Festival the first weekend in October and a Memorial Day Parade. Both are extremely well-attended and manage to draw visitors from the surrounding areas every Memorial Day morning.

According to the United States Census Bureau, the city has a total area of 2.3 square miles (6.0 km2), all of it land.

The first history of the Farmersville area was in the 1850s. There was a community developed called Deep Creek. It is located near the present Deep Creek Cemetery and there are headstones that date back to the 1850s. There was a school built there to accommodate the farm children in the area. The Fly family history, which is preserved in a book written about their travels to California, there is talk about attending the Deep Creek School in the 1860s.

Until 1863, many of the residents living on the east side of the county traveled Visalia Road by wagon to get their mail, purchase supplies and bring their goods to sell. The trip was so long that many would stop at the Wiley Hinds farm, just south of present-day Farmersville, to ask to sleep in their barn and continue their trip home the next day.

Wiley Hinds was a former slave, his brother Archibald, came from Arkansas in 1858. He settled in Farmersville, purchased other parcels for farming and was very prosperous.

In approximately 1865, two entrepreneurs, Crowley and Jasper, decided to capture the sales of residents on the east side of the county on their way to Visalia to get their mail. Unfortunately, they were not successful. In 1868, T.J. Brundage purchased the business and applied for a post office status. This was the trick needed to get the eastern residents to stop in Farmersville.

Brundage also had a lumber yard across the street from the general store. Oxen would pull the lumber shipment from the Sierra mills.

Just east of the Brundage General Store was the Brown Hotel. It was built in 1870 by Edward Balaam and purchased by Charles Brown. The hotel was two stories and a popular stop over by those needing a rest from the Overland Stage trip that would stop at the livery stable, owned by Brown, to change horses.

Farmersville's first school house was built at the southwest corner of the Four Corners. It was a two story building with the classrooms on the first floor, and a community room on the second for meetings and dances in 1869. It was torn down and a new school was built at the present day Snowden Elementary site. That schoolhouse was replaced in 1951.

The discussion to incorporate started as early as 1945. However, Don Freeman began the petition and application process that ended on October 6, 1960, in the City's incorporation. The first council was; James Tornow, Mayor, Truman Qualls, Don Freeman, Willis Freeman, Jim Steven and council members. Carl Waddle was the first City Clerk. The City struggled to get proper water delivery and wastewater treatment. It was in 1968 that the Wastewater treatment plant loan was made for $480,000 to build the first plant and transmission infrastructure. The City was discussing disincorporation by the late 1960s.

The City had already voted in 1945 to pay for its own police department so the City already had public safety. 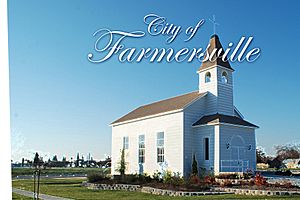 The Church/Museum is located at 881 N. Farmersville Boulevard

Built in the 1880s, the chapel of the former Farmersville Methodist Church was rolled to Farmersville on logs, with horses pulling it, in approximately 1902. It was established on Farmersville Blvd. just south of Visalia Road, also known as the "four Corners" around 1947; a Mrs. Avery donated a parcel of her land that is now Avery and Ash. The chapel portion of the church was moved again, to that location. The steeple broke during this move. It was rebuilt with the fishtail shingles.

Farmersville serves occasionally as a commuter town with many residents having to travel to larger population centers to seek employment. Local commerce is composed of mostly small, family-owned businesses, however the city also hosts a number of restaurants, including Rainbows Drive In, McDonald's, Jack-In-The-Box, Ana Maria's, Subway and Taco Bell. The stores are Dollar General as well as Rite Aide, Sams Foods Supermarket, AutoZone, Napa, and O'Reilly's auto parts stores.

Boss Hoggs' Restaurant is a local diner featuring classic American cooking and has been a family favorite with the locals. Boss Hoggs and the Donut Shop also serve as morning gathering places. El Agave Nightclub is a popular weekend attraction for many of the Spanish-speaking residents of the city and the surrounding communities. The club attracts many high quality Latino entertainers from both California and Mexico.

Major industrial manufacturers with operations in Farmersville include Cemex, Dunns Sand, and National Raisin Company which operates a fruit dehydrator in the city. La Mejor del Valle tortilla factory, a manufacturer of Mexican food products, is headquartered in Farmersville. 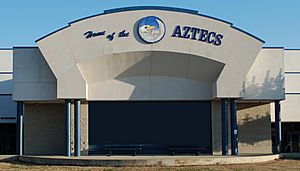 The Church/Museum is located at 881 N. Farmersville Boulevard

Built in the 1880s, the chapel of the former Farmersville Methodist Church was rolled to Farmersville on logs, with horses pulling it, in approximately 1903. It was established on Farmersville Boulevard just south of Visalia Road, also known as the "four Corners" around 1947; a Mrs. Avery donated a parcel of her land that is now Avery and Ash. The chapel portion of the church was moved again, to that location. The steeple broke during this move. It was rebuilt with the fishtail shingles.

All content from Kiddle encyclopedia articles (including the article images and facts) can be freely used under Attribution-ShareAlike license, unless stated otherwise. Cite this article:
Farmersville, California Facts for Kids. Kiddle Encyclopedia.