Porterville is a city in the San Joaquin Valley, in Tulare County, California, United States. It is part of the Visalia-Porterville metropolitan statistical area.

Since its incorporation in 1902, the city's population has grown dramatically as it annexed nearby unincorporated areas. The city's July 2014 population (not including East Porterville) was estimated at 55,466.

During California's Spanish period, the San Joaquin Valley was considered a remote region of little value. Emigrants skirted the eastern foothills in the vicinity of Porterville as early as 1826. Swamps stretched out into the Valley floor lush with tall rushes or "tulares" as the Indians called them.

Gold discovered in 1848 brought a tremendous migration to California, and prairie schooners rolled through Porterville between 1849 and 1852. Starting in 1854, Peter Goodhue operated a stopping place on the Stockton - Los Angeles Road on the bank of the Tule River. Wagon trains of gold seekers passed through the village, but other travelers found the land rich and remained to establish farms. A store was set up in 1856 to sell goods to miners and the Indians, who lived in tribal lands along the rivers. From 1858 to 1861 it was the location of the Tule River Station of the Butterfield Overland Mail.

Royal Porter Putnam came to the village in 1860 to raise cattle, horses and hogs. Putnam bought out Goodhue in 1860, turning the station into a popular stopping place and hotel called Porter Station. He bought 40 acres of land and built a two-story store and a hotel on the highest point of the swampy property, which is now the corner of Oak and Main. The town of Porterville was founded there in 1864. The town took its name from the founder's given name because another Putnam family lived south of town.

In 1862, 20.8 inches of rain fell in the area causing the change of course of the Tule River. Putnam's acres drained, and he had his property surveyed, staking out lot lines and establishing streets. Settlers were offered a free lot for every one purchased. Needs of a burgeoning California population for food gave the impetus which led to permanent development of the east side southern San Joaquin Valley. The long, dry, hot summer prompted irrigation of the lands.

In 1888, the Southern Pacific Railway brought in the branch line from Fresno. The Pioneer Hotel and Bank were built by businessmen from San Francisco. The town incorporated in 1902, as miners moved into the area to extract magnetite ore, and the Chamber of Commerce was formed in 1907. A City Manager-Council form of government was adopted in 1926, and a Charter was adopted. The City has grown from a community of 5,000 people in 1920. Agriculture supplemented by the Central Valley Water Project has been the major source of economic growth in the area. The City is the center of a large farming area noted especially for citrus and livestock.

The Native Americans living in the foothills of the Sierra Nevada mountains were relatively undisturbed by early Spanish colonization. During the late 1840s and into the 1850s, once gold was discovered in California, miners began encroaching on traditional lands. Although a treaty was signed with the local tribes in 1851, defining a proposed reservation and two hundred head of cattle per year, the US Senate failed to ratify the treaty, with every member either abstaining or voting no.

In the spring of 1856, a rumor that 500 cattle had been stolen by Native Americans began to circulate. Upon further investigation, a single yearling calf had been taken as a bridal gift. Mobs of armed settlers were organized to counter the perceived menace despite the peaceful intentions of the Native Americans. These mobs began raiding Native camps and killing their inhabitants.

One mob, under the leadership of Captain Foster DeMasters, failed to dislodge a numerically-superior Native encampment while wearing ineffective makeshift body armor consisting of cotton-padded jackets. Reinforcements were obtained from Keyesville and the resulting force, now under the leadership of Sheriff W.G. Poindexter, were similarly repulsed. After falling back, the mob then proceeded to wage a scorched-earth campaign by destroying Native American supply caches.

News of these engagements spread throughout California, exaggerating the degree of menace and misrepresenting its causes. Finally, in May 1856, army soldiers under the command of LaRhett Livingston assaulted the encampment and succeeded in driving off its defenders. The war's duration was approximately six weeks.

In retrospect, George Stewart wrote "Thus ended the Tule river war of 1856; a war that might have been prevented had there been an honest desire on the part of the white settlers to do so, and one that brought little glory to those who participated therein. The responsibility cannot now be fixed where it properly belongs. Possibly the Indians were to blame. Certainly the whites were not blameless, and it is too seldom, indeed, that they have been in the many struggles with the aboriginal inhabitants of this continent."

Historian Annie Mitchell later wrote in the Tulare County Historical Society bulletin (Los Tulares No. 68, March 1966): "Over the years it has been assumed that the Tule River War was a spontaneous, comic opera affair. It was not and if the Indians had been armed with guns instead of bows and a few pistols they would have run the white men out of the valley."

Porterville is located on the Tule River at the base of the western foothills of the Sierra Nevada and eastern most section of California's Central Valley. In the foothills above Porterville is the man-made Lake Success.

Porterville, lying along the foothills of the Sierras at an elevation of 455 feet, is located on State Highway 65, 165 miles north of Los Angeles, 171 miles east of the Pacific Coast. The City has a strategic central location to major markets and a ready access to major transportation routes

Porterville is subject to earthquakes and aftershocks due to its proximity to the Pacific Ring of Fire. The geologic instability produces numerous fault lines both above and below ground, which altogether cause approximately 10,000 earthquakes every year. One of the major fault lines is the San Andreas Fault. A few major earthquakes have hit the Porterville area like the Kern County Earthquake of 1952 and the Bakersfield Earthquake of 1952 causing serious aftershocks and earthquakes in the area. All but a few quakes are of low intensity and are not felt.[21] Most of the city are also vulnerable to floods. The San Joaquin Valley and metropolitan areas are also at risk from blind thrust earthquakes.

Porterville, CA, gets almost 13 inches of rain per year. The US average is 37. Snowfall is 0.01 inches. The average US city gets 25 inches of snow per year. The number of days with any measurable precipitation is 46.

On average, there are 271 sunny days per year in Porterville, CA. The July high is around 100.5 degrees. The January low is 35.6. The comfort index, which is based on humidity during the hot months, is a 54 out of 100, where higher is more comfortable. The US average on the comfort index is 44.

Owing to geography, heavy reliance on automobiles, and agriculture, Porterville suffers from air pollution in the form of smog. The Porterville area and the rest of the San Joaquin Valley are susceptible to atmospheric inversion, which holds in the exhausts from road vehicles, airplanes, locomotives, agriculture, manufacturing, and other sources. Unlike other cities that rely on rain to clear smog, Porterville gets only 13.00 inches (330.20 mm) of rain each year: pollution accumulates over many consecutive days. Issues of air quality in Porterville and other major cities led to the passage of early national environmental legislation, including the Clean Air Act. More recently, the state of California has led the nation in working to limit pollution by mandating low emission vehicles. Smog levels are only high during summers because it is dry and warm. In the winter, storms help to clear the smog and it is not as much of a problem. Smog should continue to drop in the coming years due to aggressive steps to reduce it, electric and hybrid cars, and other pollution-reducing measures taken.

Porterville is also experiencing environmental issues due to California's extreme drought. Most of the city of Porterville has run out of their supply of groundwater, an unfortunate consequence of the entire city relying heavily on private wells. Citizens receive shipments of bottled water and bathe in government-provided public showers. 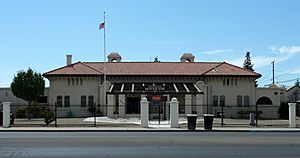 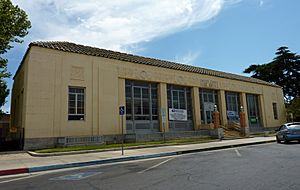 The Porterville Main post office is one of three Porterville structures on the National Register of Historic Places (NRHP). 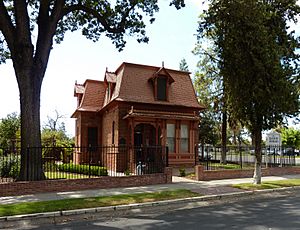 The NRHP listed Zalud House is a former private home, now a museum. 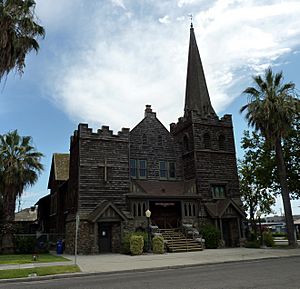 The First Congregational Church is also listed on the NRHP.

There were 11,884 households out of which 47.5% had children under the age of 18 living with them, 53.1% were married couples living together, 17.7% had a female householder with no husband present, and 22.8% were non-families. 19.1% of all households were made up of individuals and 8.3% had someone living alone who was 65 years of age or older. The average household size was 3.20 and the average family size was 3.62.

All content from Kiddle encyclopedia articles (including the article images and facts) can be freely used under Attribution-ShareAlike license, unless stated otherwise. Cite this article:
Porterville, California Facts for Kids. Kiddle Encyclopedia.