Escalon (Spanish: Escalón, meaning "Step") is a city in San Joaquin County, California, United States. The population was 7,132 at the 2010 census, up from 5,963 at the 2000 census. Escalon is a Spanish word meaning "stepping stones." The name comes from founder James Wheeler Jones who came upon the name in a book in the Stockton Free Library and liked the name so much he gave the name to the town.

Escalon has a large agricultural industry which is based on the fertile farmland surrounding the city. Escalon is home to one of the largest walnut processing facilities in the world, DeRuosi Nut. Some of the largest employers in Escalon include; DeRuosi Nut, GoldRiver Orchards, Grower's Choice, and Roche Bros Inc. are many of the nut processing plants that lie in the heart of Escalon accounting for a great deal of the local agricultural economy. Escalon is always growing its agriculture in new ways. 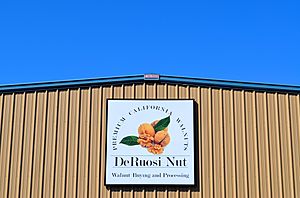 Major employers in the city include:

The Escalon High Cougars represent the local high school in the Trans Valley League, in which they are founding members. The Escalon High Varsity football team has enjoyed numerous success over the years. Winning three State Championships in the past 30 years. The Cougars are currently the 33rd winningest team in the state of California among all divisions with a record of 563-276-43 as of the end of the 2019 season.

In 1963, representatives from eight component districts (Burwood, Collegeville, Dent Union, Escalon Union High, Farmington, Four Tree, Lone Tree, and Van Allen)began a series of six meetings commissioned by their component boards to explore the concept of creating one unified school district to serve the educational needs of the districts involved. At the conclusion of these meetings, a recommendation was forwarded to the County Superintendent of Schools that the eight districts form a unified district. The recommendation was approved by the San Joaquin County Board of Education in October 1964.

On February 24, 1965, a public hearing was held on the proposal in the Escalon High School library. An election day of March 8, 1966 was designated by County Superintendent Gaylord Nelson. Voters approved the unification and on March 15, 1966, the San Joaquin Board of Supervisors created what would soon become the Escalon Unified School District, effective July 1, 1967. 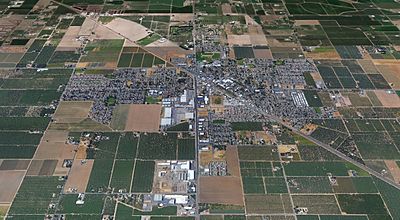 California State Route 120 runs through Escalon connecting it to the Bay Area and to the west through Oakdale where it merges with California State Route 108 to the Sierra Nevada. McHenry Avenue runs south towards Modesto crossing the Stanislaus River over the newly rebuilt McHenry Bridge. Escalon currently has 4 stoplights in town all within a 1/4 mile proximity.

South McHenry Avenue: This project will widened from two lanes to three lanes from Narcissus Way to Jones Road (3300 lineal feet). The improvements will include pavement widening and curb and gutter on the east side. It is anticipated that no right of way will be required but won't be confirmed until the project is in the design phase. This project is awaiting approval in 2030 for completion by 2036

Ullrey Ave./ McHenry Ave. Traffic Signal: design and construction of a signal at the intersection of McHenry Avenue and Ullrey Avenue.

SR 120 at Brennan Avenue In 2020 $446,066 was approved for intersection improvements, no traffic signal. The project is slated for completion in 2026.

Escalon Bellota Road Improvements Widen 2 to 4 lanes with shoulders from Escalon City limits to Mariposa Road. Project is estimated to be completed by 2025.

French Camp at Hwy 120 Roundabout The 2020 SHOPP, approved in May 2020, included the following Collision Reduction item of interest, Route 120 near Manteca, at French Camp Road. Construct roundabout. Programmed in FY23-24, with construction scheduled to start in December 2024. Total project cost is $16,204K, with $10,536K being capital. 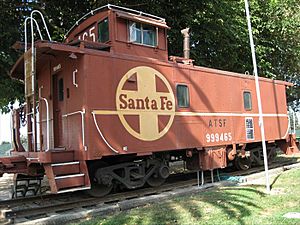 This Atchison, Topeka and Santa Fe Railroad caboose is located in Escalon's Main Street Park and owned by the Escalon Historical Society. The caboose sits very near the spot where the Santa Fe depot was erected as one of the new town's first buildings in the late 1890s. The first train passed through Escalon in 1896.

Escalon has two railways through town. The former Tidewater Southern Railway comes west into town from Manteca along Highway 120 until it hits McHenry Avenue and heads south out of town. This railway is owned and operated by Union Pacific Railroad and is still in use today, though the tracks end at the city limits of Jones Avenue.

The other railway in town is the BNSF Railway Stockton Subdivision which has two tracks, divides the town in a northwest to southeast direction. Oftentimes two trains will meet and pass on opposing rails through town, often backing up traffic along Highway 120 for over 20–30 mins. The Santa Fe Railway San Francisco Chief served Escalon as a flag stop until 1971 along this line — this was the final passenger rail service to the town.

All content from Kiddle encyclopedia articles (including the article images and facts) can be freely used under Attribution-ShareAlike license, unless stated otherwise. Cite this article:
Escalon, California Facts for Kids. Kiddle Encyclopedia.