Avenal is a city in Kings County, California, United States. Avenal is located 35 miles (56 km) southwest of Hanford, at an elevation of 807 feet (246 m). It is part of the Hanford–Corcoran Metropolitan Statistical Area (MSA Code 25260), which encompasses all of Kings County. In area, it is the largest city in Kings County. The Zip Code for this community is 93204, and telephone numbers use the sequence (559) 386-XXXX. The population was 15,505 in the 2010 census, which includes inmates at the Avenal State Prison, the first prison actively solicited by a community in the state of California. Many of the remaining residents largely either work at the prison or in the agriculture industry. The prison provides approximately 1,000 jobs to residents. The California Department of Finance estimated that Avenal's population was 13,159 on January 1, 2015. As of that date, Avenal State Prison held 4,165 inmates, which was about 32% of the total population of Avenal. Inmates are counted as city residents by both the United States Census and the California Department of Finance.

The City of Avenal was named by Spanish soldiers and explorers. In Spanish, "avena" means oats, and "avenal" means oatfield. This area was covered with wild oats, "waist high," that looked like golden silk and covered the Kettleman Plains.

Early American settlers arrived in the Kettleman Hills during the 1850s with dreams of raising cattle and farming. Oil, however, would bring fame, fortune and people to the area. Native Americans had always known oil was in the hills, with natural seepage around Coalinga and Tar Canyon. The first Kettleman Hills well was drilled in 1900, followed by countless unproductive efforts. 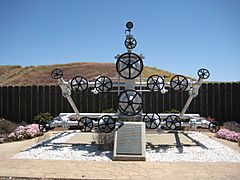 The discovery of oil transformed Avenal into a boomtown. In 1929, Standard Oil surveyed the current site of Avenal to build a town. Makeshift houses were hauled in from Taft to take the place of the tents. A water line was laid and later a sewer plant was installed, a post office replaced a cigar box in the general store, a fire department was organized and a community grew. Standard Oil Company built the residents a 600-seat theater and a hospital.

Also in the first year (1929), nearly 20 businesses occupied Kings Street and Skyline Boulevard. By 1936, Avenal boasted a population of 3,000 - mostly oil workers - with 100 businesses and 69 private telephones and numerous community organizations. In 1940, Avenal was the second largest town in Kings County with a population of over 4,000 and was known to have some of the best services and schools in the state.

Although today Avenal and its economy are largely reliant on the Avenal State Prison and agriculture, Avenal was once a booming oil town known as the "Oil Fields Capital."

The teeming life of the oil fields, the forward thrust of civilization into the sun-baked hills so recently in their pristine state meant the early development of nearby towns where adequate living facilities could be provided to care for the fast-growing population.

Milham City was projected by a group of Kings County citizens who owned lands on the slope of the hills east of the oil field. It scarcely had emerged from the dream stage when the Standard Oil Company announced in 1929, that a townsite had been set aside on the northwestern slope of the hills and that it would be called Avenal.

Thus the present thriving, interesting little town of Avenal came into being as the "oil capital" of the great field. Roads and streets were surveyed and laid out, water mains were laid, the town was launched on its purposeful career almost overnight.

An emergency hospital was built. Small and large homes were purposefully constructed to enjoy a fuller life in the erstwhile barren plains and trees were planted to provide much needed shade.

While the oil fields and their urban center were populated with industrious, law-abiding people the problem of keeping the peace and maintaining the dignity of the law existed there just as it does in all other communities where there is life, action and big payrolls. To meet this commonplace problem a township was established and on April 1, 1937, E.W. Oliver was appointed as justice of the peace and William "Bill" Brendal was named constable. Aiding and cooperating with them in the enforcement of the law was Deputy Sheriff Richard "Dick" Doty, who was appointed by Sheriff L.P. Loftis in 1935.

By election in February 1934, the Avenal Township formed a fire district, which served efficiently both in the town and country districts. The three fire district commissioners originally elected were Ray Mohler, Floyd Rice and Jess Hamilton.

The Avenal district owned one well-equipped White fire truck and a half interest with the West Side Fire Protection District, of a 2-ton Reo fire truck. Two full-time drivers were regularly employed and 20 firemen worked call. The firehouse provided living quarters for the employees. Fire Chief L. H. Dell was assisted by M. L. Sperling.

By April 1930, Dr. S. V. Dragoo was the head of the emergency hospital. Dr. Dragoo was assisted by one office worker and two nurses, having two special nurses on call. Between five and six hundred calls per month with about thirty accident cases were handled by this organization, not to mention the ambulance service extended.

Appointed postmistress in November 1931, Mrs. Marie Eads served in that office until July 1933, when she resigned and Charles E. Day was appointed. The post office later occupied a two-story building leased by the Standard Oil Company in 1935. Later in Avenal's history, the Post Office leased a space adjacent to Finster's Market (later T&T Market). In the late 1990s, the post office was relocated to its current location near the intersection of Skyline Blvd and San Joaquin Street.

The collapse of oil and gas production came with the intrusion of salt water into the oil reservoir, leaving 65 to 70 percent of the North Dome of the Kettleman Hills still undisturbed.

In 1953, oil companies with holdings in the area fields unitized, naming the Standard Oil Company of California to operate the fields. Avenal's economy dwindled and with it, many stores, buildings and houses were vacated until the 1960s when an influx of agricultural workers made a major impact on Avenal and surrounding area.

The early 1970s saw two substantial projects that had significant impacts on the city: the completion of the California Aqueduct which brought in needed water to the westside, and the opening of Interstate 5.

The citizens of Avenal voted for incorporation in September 1979, and while going through the early stages of being a new City, the citizens pursued and were successful in bringing a state prison to Avenal. Avenal State Prison opened in 1987. By 2009, it housed 6,577 inmates and employed 1,517 people, making it a vital part of the community. The building of the facility dramatically increased the City's total valuation with construction, improvements and activity that could be seen in every area of the City.

Avenal is also home to the Central California Soaring Club headquartered at the Avenal Gliderport. This year round operation is one of the few glider-only airports in the western United States, and one of only a few in the entire US that owns/operates its own airport. A soaring contest is held there every spring.

Construction has been completed on the renovation of Skyline Boulevard (California State Route 269) in the City's joint effort with Caltrans. Avenal has also completed a massive public improvement project with the development of 52 miles (84 km) of new curbs, gutters and sidewalks throughout the City.

In November 2010, the Avenal Police Department was initiated with 14 sworn officers. Jack Amoroso was the first police chief.

Although Avenal's future is no longer closely tied to oil, it will always mark its beginnings from "the day Milham came in," and the cigar box on the counter of the general store which was its first post office.

Most of the population resides in the southwestern portion of the city. The northeastern areas, separated by hills, and where Interstate 5 passes through, remain mostly rural.

According to the Köppen Climate Classification system, Avenal has a semi-arid climate, abbreviated "BSk" on climate maps.

Avenal is a small city of approximately 15,505 people, including prison inmates. Avenal owes its origin to the discovery of oil on 4 October 1928, in the adjacent Kettleman Hills. Avenal was the site of a "tent city" as the boom started, but foresight made the boom orderly, so that by 1940 Avenal was the second largest town in Kings County with a population of 4,600.

Growth continues today to include a more diversified economy based on oil, agriculture, and the service industry. In 1978, Avenal citizens voted to incorporate. The presence of the Avenal State Prison helps this rural community maintain economic stability, especially as the once-productive Kettleman North Dome Oil Field reaches exhaustion (less than one-half of one percent of its original oil remains).

There were 1,928 households out of which 60.2% had children under the age of 18 living with them, 58.5% were married couples living together, 16.8% had a female householder with no husband present, and 14.9% were non-families. 11.3% of all households were made up of individuals and 4.7% had someone living alone who was 65 years of age or older. The average household size was 4.14 and the average family size was 4.30.

Avenal has an annual celebration held on the first weekend in May called Avenal Old Timers Day.

All content from Kiddle encyclopedia articles (including the article images and facts) can be freely used under Attribution-ShareAlike license, unless stated otherwise. Cite this article:
Avenal, California Facts for Kids. Kiddle Encyclopedia.