Kids Encyclopedia Facts
Not to be confused with Maricopa County. 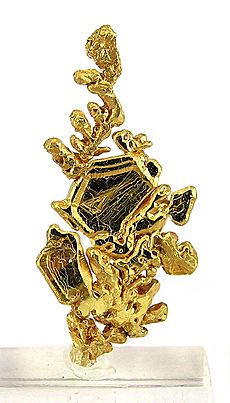 Specimen gold from the Mockingbird mine.

Mariposa County is a county in the U.S. state of California. As of the 2010 census, the population was 18,251. The county seat is Mariposa. It is located in the western foothills of the Sierra Nevada mountains, north of Fresno, east of Merced, and southeast of Stockton.

The county's eastern section is the central portion of Yosemite National Park.

There are no incorporated cities in Mariposa County; however, there are communities recognized as census-designated places for statistical purposes. It also has the distinction of having no permanent traffic lights anywhere in the county.

Mariposa County was one of the original counties of California, created at the time of statehood in 1850. While it began as the state's largest county, territory that was once part of Mariposa was ceded over time to form twelve other counties: Fresno, Inyo, Kern, Kings, Los Angeles, Madera, Merced, Mono, San Benito, San Bernardino, San Luis Obispo, and Tulare. Thus, Mariposa County is known as the "Mother of Counties".

Mariposa County's original seat was a now-nonexistent hamlet known as Agua Fria (Spanish for "cold water"), about 3 miles directly west of Mariposa proper on Agua Fria Road, which runs from Highway 140 to the south, to the community of Mt. Bullion to the northwest. Charles Fremont moved the county seat to Mariposa in 1854, resulting in the construction of the Mariposa County Courthouse, whose grounds occupies an entire block. The historic structure is fronted by Bullion Street; Jones Street is to the rear, with 9th and 10th Streets on either side. This handsome, white judicial building erected with whip-sawed wood from nearby forests is the oldest courthouse still in use in California: cases are still tried there to this day. The courthouse is so recognizable that its likeness is on the Mariposa County Seal. Also particularly noteworthy is the courthouse's clock tower and bell, which chimes every hour, on the hour, 24 hours a day, 7 days a week.

The county took its name from Mariposa Creek, which was so named by Spanish explorers in 1806, when they discovered a great cluster of butterflies ("mariposas" in Spanish and Portuguese) in the foothills of the Sierras. Each year, the first weekend in May, residents mark the annual arrival of migrating monarch butterflies with a "Butterfly Days" festival and parade.

Mariposa County is located at the southern end of California's Mother Lode region. During the California Gold Rush, great quantities of the prized mineral were found and extracted, first in local stream-beds and later in hard rock mines. One of the most notable beneficiaries of this wealth was the famed explorer and 1856 Republican presidential candidate, John Charles Frémont, for whom the local hospital and Charles Street (more commonly known as "Highway 140") are named. (Jessie Street, in the town of Mariposa, is named for Fremont's wife, Jessie Benton Frémont, who came to Mariposa with her husband on many extended visits although they never took up permanent residence within the county.)

Two small gold mines in Mariposa county, the Mockingbird and the Colorado Quartz, intermittently produce world-class (and very expensive) specimens of crystalline gold for mineral collectors. "Specimens from these occurrences commonly have bright luster and rich color, with well-developed crystals in unusual and attractive arrangements." The best-known example is "The Dragon", now on display at the Houston Museum of Natural Science.

There were 6,613 households out of which 25.6% had children under the age of 18 living with them, 55.8% were married couples living together, 8.0% had a female householder with no husband present, and 32.1% were non-families. 26.5% of all households were made up of individuals and 11.2% had someone living alone who was 65 years of age or older. The average household size was 2.37 and the average family size was 2.86.

Mariposa Yosemite Airport is a general aviation airport. The nearest airports with scheduled flights are in Fresno and Merced. 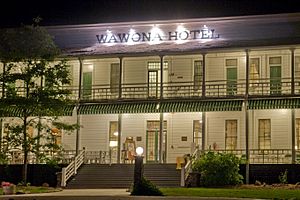 The historic Wawona Hotel, built in 1876

The population ranking of the following table is based on the 2010 census of Mariposa County.

All content from Kiddle encyclopedia articles (including the article images and facts) can be freely used under Attribution-ShareAlike license, unless stated otherwise. Cite this article:
Mariposa County, California Facts for Kids. Kiddle Encyclopedia.