Kids Encyclopedia Facts
Not to be confused with Maricopa, California.

Mariposa (formerly Aqua Fria) is a census-designated place (CDP) in and the county seat of Mariposa County, California, United States. The population was 2,173 at the 2010 census, up from 1,373 at the 2000 census. Its name is Spanish for "butterfly", after the flocks of monarchs seen overwintering there by early explorers.

Mariposa County includes much of Yosemite National Park, and a good deal of the local economy is related to the park and to tourism. The county courthouse, constructed in 1854, is the oldest in continuous use west of the Rockies. Tours are available.

The county lies at the southern end of the Mother Lode, and Europeans were attracted to Mariposa by gold. During the 19th century California Gold Rush, its streams were panned and deep mines worked the underground veins. At one time John C. Frémont lived here and owned claims to much of the mineral wealth of Mariposa. He later was the first United States Senator from the state, and the first Republican candidate for President.

According to the Köppen climate classification system, Mariposa has a hot-summer Mediterranean climate, abbreviated "Csa" on climate maps. Along with Very wet winters 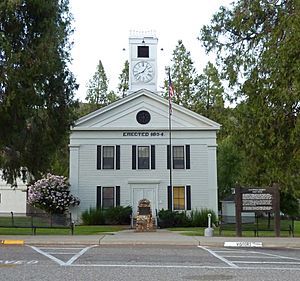 The town was founded as a mining camp on the banks of a seasonal stream known as Aqua Fria. This original town site was located about 6.0 miles (9.7 km) to the west of present-day Mariposa. After a flood during the winter of 1849/50, and fires, the town was moved to the location of today's Mariposa, although mainly due to better terrain and the presence of Mariposa creek, a large producer of placer gold. The gold in small Aqua Fria creek was soon removed, and lacked water most of the year. So the populace moved on to the new boomtown. The large Mariposa mine soon opened, with a 40-foot waterwheel crushing gold ore. This provided a stable source of employment, and Mariposa soon became the supply hub for hundreds of outlying mining districts. Placer gold, that which is found in creekbeds and alluvial deposits, was soon extinguished, and the era of hard rock, deep mining began. In 1851 the "new" town of Mariposa became the county seat, which reached nearly to Los Angeles. By 1854 Mariposa had a grand courthouse which is still in operation. Some refer to the lumber being cut from an area to the east of town known as "logtown" but no maps or certifiable sources can attest to the existence of Logtown. Most likely the lumber for the courthouse was milled in Midpines, where there was an unusual abundance of sugar pine trees.

John C. Frémont had a Spanish land grant that gave him ownership of most of the Mariposa mining district, but the possibility of securing his property was nearly impossible due to the huge influx of gold seekers, and little or no enforcement from the few law keepers available. In book

There were 676 households out of which 21.6% had children under the age of 18 living with them, 31.4% were married couples living together, 13.6% had a female householder with no husband present, and 51.5% were non-families. 47.6% of all households were made up of individuals and 27.1% had someone living alone who was 65 years of age or older. The average household size was 1.94 and the average family size was 2.77.

All content from Kiddle encyclopedia articles (including the article images and facts) can be freely used under Attribution-ShareAlike license, unless stated otherwise. Cite this article:
Mariposa, California Facts for Kids. Kiddle Encyclopedia.