Yosemite West is an unincorporated community of resort homes located just outside the southern area of Yosemite National Park, just off Wawona Road, a continuation of State Route 41 from Fresno. It is situated one mile (1.6 km) south of the Chinquapin intersection of Wawona Road with Glacier Point Road at an altitude of 5,100–6,300 ft (1,600–1,900 m). The elevation reported by the USGS is 5,866 feet (1,788 m). The community is part of Henness Ridge, nearly 3,000 feet (910 m) above the southern banks of the Merced River and State Route 140 from Mariposa. Addresses in this area are shown as "Yosemite National Park, CA 95389"

Logging: timber and growth of the Yosemite railroad 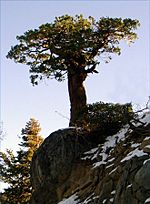 As early as 1912 the cutting of timber in the Chinquapin area was started and logs were hauled to Merced Falls. The Yosemite Valley Railroad was built to carry out the lumber harvested from the vast supply of Sugar Pines found along the Merced River canyon. Immortalized in author Hank Johnston’s book, “Whistles Blow No More”[1], the Yosemite Lumber Company logged in this area. In fact, the remains of the longest Incline rail system ever built are located at what is now Camp One Resort [2], just a short distance away from the Yosemite West development. The incline rose to a height of 3,100 feet (950 m) above the Merced River. The Camp One incline was used to lower logs to the Merced River at El Portal from the logging area. One of the stops on the Yosemite Valley Railroad line was the lumber mill built by the Yosemite Lumber Company where the wood was planed, finished, dried and stored. The lumber company is gone now and trees have fully returned with most 80+ feet (24+ m) tall, surrounding most homes on the hill. The old Shay logging train grades have been replaced with paved roads and underground utilities, giving it a pleasant rural atmosphere.

Hiking trails starting at or near Yosemite West 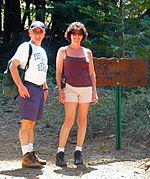 Deer Camp trailhead at the Yosemite West entrance from Hwy41

Several trails begin at the border of Yosemite West, a private community. Some of them follow the old railroad beds left by the Yosemite Lumber Company. One such trail is across Hwy 41 near the Henness Ridge Road turn off to Yosemite West. Here you can find a parking area and the trailhead for Deer Camp Trail.[3] This trailhead is just south of Chinquapin and Glacier Point Road. As you hike along the trail above Hwy 41, it passes over Rail Creek and Strawberry Creek on its way to Deer Camp on Empire Meadow. 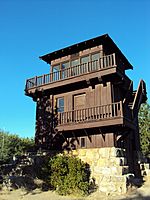 Alder Creek Trail branches off from Deer Camp Trail. Along Alder Creek Trail you will come to Alder Creek Fall and the remnants of the old Yosemite Lumber Company railroad. You will see old railroad ties and pieces of track. In spring, Alder Creek Fall, which cascades down about 100 ft., can be a lovely sight. Some of the areas along the trail were at one time almost completely clear-cut by the lumber company. But now the area has dense stands of conifers and a few oaks and is well populated with birds in its full canopy. The trail is moderate in difficulty but the terrain is smooth. Towards the last mile or so it is steep as you hike down toward the end of the trail at Wawona. 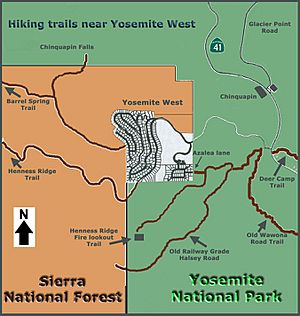 Another hiking experience is the Henness Ridge Fire Lookout Trail. This unmarked trailhead starts at the end of Azalea Lane in Yosemite West. Using the asphalt access road to the right, hike past the water towers and continue 0.7 miles to the Henness Ridge fire lookout tower. This historic site is one of two remaining four rustic-style lookouts in the state. Built in 1939 by CCC, it was used by US Park Service for fire detection during the 60's and 70's, and is now historic structure number 5300. 360 degree panoramic views of Yosemite can be seen from this vantage point. 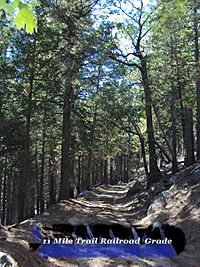 Another branch of the trail starting at Azalea Road. Take the path to the left and proceed a quarter mile northeast distance, the trail turns south. You are now on the Eleven-mile Trail also known as the Old Wawona Road, which parallels the current Wawona Road. Follow this old road bed south. The trail branches at the Eleven-mile Creek. Follow the trail, which parallels the creek bed, to the right to arrive at Eleven- mile Meadow.

Eleven-mile meadow has had many different uses through the years. The Meadow had been used for cattle grazing operations until the early 1930s, as a logging camp and as a CCC camp which was established in 1933. Earlier on, Stage coaches brought travelers to the area with a stop at the Eleven Mile Change Station which was near Chinquapin. As the 20th century approached, the roadbed was converted to a rail bed. The Yosemite Lumber Company used it transport logs to the incline at Henness Ridge. The incline lowered logs to the Merced River far below.

Using the old railroad bed, the hike to the 11 mile trail meadow is an easy walk from Yosemite West and is about 2.8 miles in length, each way.

The community: a look at the homes of Yosemite West

Yosemite West is a community of more than 151 private residences and resort homes which can be accessed from HWY41 via Henness Ridge Road, approximately seventeen miles (27 km) inside the South Entrance of the Park. In addition, located high on top of Yosemite West at an elevation of 6,200 feet, there is a 48 unit condominium complex. Most condos are available for daily rental to guests of Yosemite National Park, while others are private vacation residences.

The land for this community was purchased and developed in the 1960s by Yosemite Highlands, Inc., a group of business and professional men from the San Jose area. They envisioned a unique Mountain Resort area accessible year round for leisure time recreation. A complete economic feasibility study was made by the Economic Research Association. [4] Six development schemes produced by Victor Gruen Associates [5] of Los Angeles, were analyzed before settling on the one now in effect.

Photos of the Yosemite West homes

All content from Kiddle encyclopedia articles (including the article images and facts) can be freely used under Attribution-ShareAlike license, unless stated otherwise. Cite this article:
Yosemite West, California Facts for Kids. Kiddle Encyclopedia.